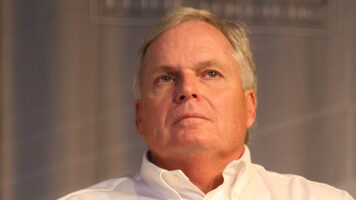 Rick Hendrick started out with the simple life working on the family farm in Virginia, but he was always interested in cars and speed.  He worked with his father building cars and went drag racing in an old Chevy. [/media-credit]While still in high school he won a contest for building engines.  His thoughts of becoming a baseball player faded and he attended North Carolina University in a program that had him also working at Westinghouse Electric Company in Raleigh, N.C.

He then decided to purchase a used car lot with the help of an established new car dealer and it was named Hendrick Automotive Group.  In 1976 he sold his assets to buy a franchise in South Carolina and became the youngest Chevrolet dealer in the country.

Hendrick was able to turn the troubled dealership into one of the most profitable in the region.  From there he bought a dealership in Charlotte N.C. and the rest is history with his success in automotive dealerships now exceeding some 80 franchises employing in excess of 5,000 employees.

Drag boat racing fascinated him in the late 70’s and he had a team that won three championships and set a world record of 222.2 with Nitro Fever.

With his automotive business home base being located in Charlotte, it was a natural that he became involved in the NASCAR Sportsman (Nationwide) series.  By 1984 he formed All-Star Racing which is now Hendrick Motorsports.  He cobbled together a small race shop with five employees and attempted to pull off a deal to have Richard Petty race the Daytona 500 for him, but the deal fell apart.

Not to be discouraged by the fact he no sponsor or driver, Hendrick hired Geoff Bodine who finished eighth in the Daytona 500.  Money was tight and Hendrick didn’t think he could race more than five races, but Bodine won at Martinsville and Northwestern Security Life came on board with sponsorship funds and at that point saved the day for the team.

Hendrick credit’s the loyalty of his group of employees for the success he has had.  He said, “I want to be competitive and I want to win races and championships, but you know what means more to me?  Guys who say our place is special and appreciate their jobs and feel like it’s a family.”

The ability to lead, make good decisions and inspire loyalty has started at the top with Hendrick and led to stability throughout his organization

His recent tough decision to swap the teams around within his organization is just one example of his leadership.  Though the shakeup was announced two days after Jimmie Johnson clinched his fifth consecutive NASCAR Sprint Cup Championship, the decision was made two weeks before in a lengthy meeting with all the involved parties.

It was Hendrick that calmed the waters after the news making  mid- race team swap of the Lowe’s 48 over-the-wall crew with Jeff Gordon’s crew.  He  motivated everyone not to rest, not to back down and to continue to overcome Denny Hamlin’s chance to win his first NASCAR title in the Cup series.

Hendrick watched the Petty Championships and the titles won by Richard Childress Racing and wondered how he could beat them.  Well it is obvious he put all the pieces in place to win 10 Championships in NASCAR top-tier series.

Jimmie Johnson’s fifth consecutive championship put the dynasty built by Rick Hendrick in the record books as one of the top organizations in sports history alongside teams like the Boston Celtics and New York Yankees.  In the NHRA John Force who has 15 Top Fuel Funny Car titles, won 10 in a row from 1993 to 2002.

Hendrick plans to win more championships with his roster of drivers, Johnson, Dale Earnhardt Jr., Jeff Gordon and Mark Martin who will hopefully yield winning results with the realignment of all the teams except for the five-time champ and his crew chief, Chad Knaus.  In 2012 Kasey Kahne will move in to the slot occupied by Mark Martin along with his crew chief, Kenny Francis.

It has been a long road for Hendrick and not always an easy one with legal problems, illness and the tragic airplane crash that killed his son, brother and two nieces along with others from the organization.

For now though, Hendrick Motorsports has set the bar very high for all the other NASCAR teams.  Watching how the Hendrick drivers fare in 2011 will be very interesting and we just may see some surprise turnarounds.