Kenny Wallace Proves A Man of Many Talents 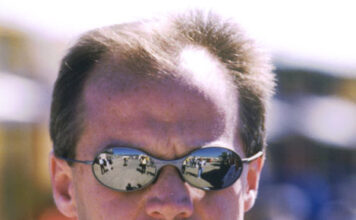 Kenny Wallace, known as the ‘Hermanator’ and for his unusual laugh that he sports so often on his SPEED TV gig, is indeed a man of many talents. His newest talent is as stand in for Roush Fenway Racing driver Matt Kenseth, who is expecting a new baby with wife Katie to be delivered right around the Daytona 500.

Wallace has announced that he is ready to step into Kenseth’s No. 17 Cup car for practice and qualifying during Speedweeks at Daytona International Speedway if needed.  Wallace’s first chance at stepping into the car will be for practice on February 11th in preparation for the Bud Shootout.

“I got a call last night from (Roush Fenway Racing GM) Robbie Reiser, and he said Katie Kenseth is due to give birth to their second baby in a couple of weeks,” Wallace said on the radio show Sirius Speedway. “They want me to be on standby in case she goes into labor before the Bud Shootout or Gatorade Duel.”

“Matt will run the Daytona 500 no matter what, but they want me there in case they need me earlier in the week,” Wallace continued. “Even though it’s probably because I’m the same size as Matt and will fit into the seat easily, it took me about a quarter of a second to agree.”

In addition to being on baby watch, Wallace is also preparing for his talents to start his own upcoming race season.  He will be driving full-time for RAB Racing in the Nationwide Series, marking his 22nd year in that Series in 2011.

“I’ve been nervous since the final 2010 Nationwide Series race at Homestead trying to find the right fit for next year and now I can finally sleep at night,” Wallace said of his new ride. “My goal was to find a team with whom I could be competitive and I believe I have found that with RAB Racing.”

“I’m ready to go for 2011,” Wallace continued.  “I have known Robby (Benton) and watched him grow his team for the past few years. The relationship with Toyota Racing Development (TRD) is huge and will allow me to be able to work with at least three other Toyota teams, including my brother Rusty (Wallace) and gain valuable information that will help us with the Nationwide program at RAB Racing next year.”

Robby Benton, RAB Racing Co-Owner could not agree with Wallace more.  “Having our plans in place before the Christmas holiday was great for team morale and will provide us with ample time to prepare for what we need to do for the upcoming season.”

“We’ve made significant changes at RAB Racing over the last few months in an effort to elevate our program,” Benton continued.  “Our alliance with Toyota, the relationship we have with TRD and now adding Kenny to the mix, will bring some depth to our program.”

Benton also acknowledged that Wallace, with his many talents, will bring his own sense of style and personality to the team.

“It also helps tremendously having a driver with Kenny’s notoriety,” Benton said.  “People love him and hopefully we’ll be able to reinvigorate his fan base.”

Wallace will be piloting the No. 09 Toyota Camry for RAB Racing in the Nationwide Series.  To date, he and the team have secured several sponsors, including the University of Northwestern Ohio,  Federated Auto Parts, and Family Farmers, the latter being a coalition of soybean and corn farmers.

These sponsors are on board for at least 16 races as primary sponsors.  As with most race teams, however, Wallace and Benton are still looking to fill their sponsorship dance card for the remaining 18 races of the Nationwide season.

“We have a lot going on within our marketing department right now,” Benton said.  “I feel pretty confident about having all 34 races sold before the Daytona event in February.”

Lest anyone think that Wallace has just been waiting around for the NASCAR season to start, he has already been busy at the track in Daytona.  He participated in the Rolex 24, racing under the banner of TRG and the Children’s Tumor Foundation.

Wallace teamed up for the 24 hour race with fellow drivers Ron Yarab, Pierre Bourque, and Daniel Graeff.  While the team sought success on the track, they were also seeking to raise more than $1 million for the Foundation.

“I am really honored to help represent the Children’s Tumor Foundation, it’s very near and dear to my heart,” Wallace said prior to the event. “Along the way I’m a competitor, a winning race driver, and it’s fun to team up with a winning organization like TRG.”

Wallace and company finished 20th overall in the Rolex 24, after starting in the 24th position.

In addition to the Rolex 24, Wallace has been showing off his dirt track racing talent, kicking off his season for 2011.  He has seen action at East Bay Raceway Park in Tampa, Florida and will next travel the circuit from Volusia to Eldora Speedways throughout the year.

Wallace’s final talent will emerge later in 2011 after the finale of his NASCAR Nationwide season, when he once again assumes the duties of cruise director.  Wallace will sponsor yet again his ‘Kenny Cruise 2011″ on the Royal Caribbean Cruise Line.

Wallace will socialize on the Allure of the Seas ship, which will cruise the western Caribbean for a week.  Kenny’s 2011 cruise will leave Ft. Lauderdale on December 4th, 2011 traveling to Haiti, Jamaica and Mexico, before returning back to Florida on December 11th.

From Rolex and NASCAR Nationwide racing to filling in for an expectant Cup driver and father, as well as social directing on his own cruise, the ‘Hermanator’ is indeed a man of many talents.  And just in case that is not enough Wallace for the year, fans can also check out his famous laugh on Race Day by the Home Depot and Victory Lane on SPEED TV for yet another season.

SM Staff
Previous articleNASCAR’s Digital Fan Clubs Who is best? Who is biggest? Who has the best value?
Next articleTV Times: Will NFL Lockout Help NASCAR TV Ratings