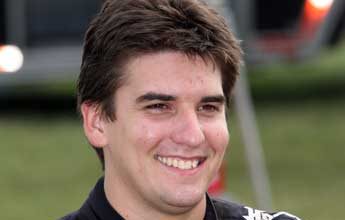 Earlier this month, Joey Coulter and Coulter Motorsports announced the continuation of their sponsorship with Rip It Energy Fuel in 2011. They will kick off the season together on February 12th with the ARCA season-opening Lucas Oil Slick Mist 200 at Daytona International Speedway. Coulter will be driving the No. 16 Chevrolet again, sponsored by Rip It Energy Fuel and the Darrell Gwynn Foundation. [/media-credit]”I am thrilled at the chance to go out and represent Rip It Energy Fuel again in select races during the 2011 ARCA Racing Series season,” Coulter said in a press release. “They have become an integral partner in not only my career but Coulter Motorsports as a whole. Daytona is one of those tracks everyone wants to win at, and showcasing our sponsorship with Rip It makes it that much more special.”

This year, Coulter is schedule to race five races during the 2011 ARCA Season – Daytona, Talladega, Michigan, Lucas Oil Raceway and Kansas. In preparation for the Lucas Oil Slick Mist 200, Coulter piloted the car to the 10th-fastest position on the chart at 49.543 seconds.

“The (Daytona ARCA) test proved to be very beneficial, allowing me to adapt to the new, smoother pavement, and my Coulter Motorsports team to work on our cars,” Coulter said. “My guys did a great job and I want to especially thank Randy (Renfrow) for stepping in for me when I was gone. He really got the cars dialed in and setup for drafting. Michael (Chapman) did a good job setting the cars up identically, and I know he will make sure we bring back a rocket ship. I am excited to be back racing in 2011 and can’t wait for Daytona!”

Also this season, Coulter also will be competing for Rookie of the Year in the Camping World Truck Series, driving the No. 22 Silverado for Richard Childress Racing. Rip It Energy Fuel also announced they’d serve as an associate sponsor on his truck.

“It just all fell together so fast,” Coulter said. “It was unbelievable. For me, it’s like a dream come true. Best Christmas present I’ve ever gotten. It’s a wonderful opportunity.”

Coulter got a phone call from Richard Childress following the final race of  the season at Rockingham, where the opportunity was offered. The season opener at Daytona next week for the Camping World Truck Series will be his first truck race.

“We’ve gotten to test twice,” Coulter said. “We went down to Disney World Speedway in Orlando and tested for a good, solid day and a half. Then just last week, I was in Gresham for a day, doing a short-track test.

“Man, what a piece of equipment. It’s unbelievable the caliber of equipment that comes out of these shops. Compared to an ARCA car, they’re different but they weren’t as different as I thought they were going to be. I really expected it to be something I hadn’t ever really felt before but it was pretty close.”

Coulter has already got the chance to work with teammate Austin Dillon at Disney World Speedway.

“Yeah, he gave me lots of advice,” Coulter said. “It helped out a ton. After talking and testing it at Disney World for that day and a half, we kind of figured out that our driving styles are pretty close. We’re able to share information and our crew chiefs can communicate real well, so we’re really going to be able to learn a lot off each other.

“They learned a lot already off our short-track test. They weren’t able to make it down there, but they were able to learn off the notes we brought back. Being able to use all their notes from last year should be able to give us a baseline for the places I’ve never been before.”

About Rip It Energy Fuel:

Rip It Energy Fuel by National Beverage Corp. (NASDAQ: FIZZ) is available in fifteen exhilarating flavors, including three sugar-free varieties. Great-tasting and power-packed, Rip It provides REAL energy for REAL people at a REAL value. In an office, on the job, on a mountain, riding waves, doin’ flips, doin’ tricks, jammin’ all night, crammin’ all night, whatever your life calls for, Rip It is there to fuel you.  Crack open an ice-cold Rip It Power and Feel the REAL Taste of BOLD energy surge through your body. Or maybe you prefer the sweet taste of Sugar FREE Citrus X to slap your tongue back to life. Rip It Energy Fuel has the complete line of Regular and Sugar FREE flavors in both 16 oz. cans and 20 oz. resealable bottles to make Rip It a REAL part of your everyday life.