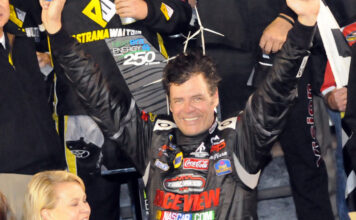 [/media-credit]This was Waltrip’s first truck series victory, 10 years to the day after his first Daytona 500 victory and on the anniversary of his former boss’ death, Dale Earnhardt.

It was a very emotional win for Waltrip and had tears in his eyes as he talked about what this win meant.

Jennifer Jo Cobb finished sixth and also became the highest finish in the Truck Series for a woman.

SM Staff
Previous article
Nationwide Insurance Adds Danica Patrick to You and Me Both Junior Team
Next article
A Victory For The Ages: An Earnhardt Kind Of Day