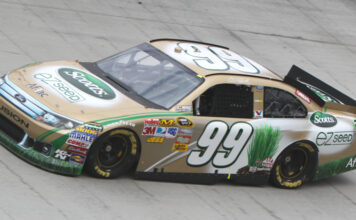 [/media-credit]1. Carl Edwards: After Kyle Busch took the lead on the final pit stop, Edwards chased the No. 18 M&M’s Toyota over the final 45 laps at Bristol, nearing the lead on occasion but never overtaking Busch. Despite pulling close enough to implement the tried-and-true “bump and run” ploy, Edwards, in the No. 99 Roush Fenway Ford, settled for second, then made it clear that he still “owes” Busch one.

“That’s right,” Edwards said. “Kyle wrecked me in Phoenix, and although it was unintentional and Kyle apologized immediately, I made it known to Kyle that I still retain the right to exact payback. I gave him something to worry about. As my primary sponsor for the race, Scott’s EZ Seed, would suggest, I ‘planted’ a seed.”

As you may have heard, Gilbert Gottfried was fired from his duties as voice of the Aflac duck for some insensitive remarks he posted on Twitter. I heard Kyle, the Keselowski clan, Kevin Harvick, and many of my other rivals got a little excited when they heard that I lost my ‘voice.’”

3. Kyle Busch: Busch was strong all day, leading 153 of 500 laps, including the final 45, to conquer Bristol again, a day after claiming the Nationwide Scotts EZ Seed 300 on Saturday. Busch has now won the last five NASCAR races at Bristol, including the last two Sprint Cup races there. He vaulted eight places in the point standings to sixth, 17 behind older brother Kurt.

“The word ‘sweep’ has become synonymous with ‘Kyle Busch,’” Busch said. “You can call me ‘The Broom,’ but only under one condition: that you call Carl Edwards ‘The Dustpan,’ because he ate my dust.”

I understand Edwards ‘owes’ me something. I assume that would be ‘congratulations.’ Maybe Carl should act more and think less when he has a chance to bump me out of the way for a win. I drive with a simple motto in mind: ‘It’s better to owe apologies than to owe congratulations.’”

3. Kurt Busch: Busch finished seventh in the Jeff Byrd 500 at Bristol, posting his fourth top-10 finish in as many races this season. Busch took over sole possession of the Sprint Cup point standings, and now leads Carl Edwards by one point.

“Between my brother Kyle and I,” Busch said, “we have 10 wins at Bristol Motor Speedway. Sure, we face our share of criticism, which is called getting ‘Busch-flacked,’ but we dominate at BMS, and that’s a ‘Busch-fact.’  Edwards should have taken Kyle out when he had the chance. I can promise you that if it would have been me in that situation, Kyle would have been in the wall. As it was, nothing happened. The race itself was a lot like Kyle’s televised wedding on the Style Channel: uneventful.”

4. Jimmie Johnson: Johnson led a race-high 164 laps at Bristol, but finished third behind Kyle Busch and Carl Edwards, who battled for the lead before Kusch pulled away for a comfortable win. Johnson hoped that contact between the two rivals would open the door for the No. 48 Lowe’s Chevrolet to slip by for the win. As it was, Edwards raced clean, only to regret not racing Busch harder.

“Carl should have seized his opportunity while Kyle was right in front of him,” Johnson said. “Apparently, Carl took Kyle’s Yosemite Sam ‘Back Off!’ mud flaps a bit too literally. Come November, his failure to act may very well be the difference in finishing second or third in the Chase.”

Frankly, I’m amazed at all the talk about a so-called ‘feud’ between Kyle and Carl. It may be the first feud in NASCAR history initiated by a driver not wrecking another. I was content to cruise in third and watch the action, or lack of it, unfold in front of me. It reminded me a lot of trailing Denny Hamlin last year, in which I sat back and watched him unravel in front of me.”

5. Paul Menard: Menard continued his surprising start to the season, working his way to a fifth-place finish at Bristol and again leading the charge for Richard Childress Racing. Menard moved up one spot in the point standings to fifth, only 14 out of first.

“If you asked ten people on the street,” said Menard, “if they know who Paul Menard is, I’m guessing five would say ‘no.’ Of those five, three would be teammates of mine at RCR. But I don’t mind my lack of recognition and fame. Despite my obscurity, I’ve become one of the most feared drivers on the NASCAR circuit. In fact, some have taken to calling me the ‘Anonymity-ville Horror.’”

6. Tony Stewart: Stewart damaged the front end of the No. 14 Office Depot Chevrolet when he rear-ended Stewart-Haas teammate Ryan Newman, as Stewart tried to avoid the spinning No. 47 of Bobby Labonte. The damage incurred only worsened persistent handling problems, and Stewart eventually finished 19th, the last car on the lead lap.

“Ryan and I both needed repairs after that collision,” Stewart said. “I guess that’s what you call ‘teamwork.’ What can I say, though? There was nowhere I could go. My view was obscured by smoke. ‘View obscured by ‘Smoke?’ That’s a refrain that the chubby version of Tony Stewart heard quite often when he sat in the front row at drivers’ meetings.”

But times have changed. I’ve slimmed down, gas prices are up, the ‘new’ Kyle Busch is in, and Carl Edwards chickened ‘out.’”

“It was a solid day for us,” Newman said, “and third in the point standings puts us right in the thick of things. I can’t complain, and I won’t complain, otherwise, people may take to calling me ‘Knock-it Man’ instead of ‘Rocketman,’ which obviously doesn’t apply since I don’t win anything anymore.”

They don’t call Bristol Motor Speedway the ‘Bull Ring’ for nothing. That became even more evident when they announced the attendance for Sunday’s race, and everyone in the sparsely populated complex uttered a collective ‘Bull!’”

8. Dale Earnhardt, Jr.: Earnhardt finished 11th in the Jeff Byrd 500, just missing his third top-10 finish of the year. He advanced two places in the points standing to crack the Top 10 in ninth, where he trails Kurt Busch by 26.

“Not only does Junior Nation have a buzz,” Earnhardt said. “Junior Nation is abuzz. Thankfully, most members of the Nation are optimists, which means they see a glass as half-full, which inevitably means they’ll soon make it all empty.”

“Now, the sales of Dale Earnhardt, Jr. merchandise are booming as always. And we’re hoping that fans will also flock to buy merchandise bearing the likeness of Danica Patrick, who drives for me for JR Motorsports. One particular item is sure to be a hot seller. It’s a pair of ladies underwear balled up and shrink-wrapped in No. 7 GoDaddy.com packaging. We’re calling it ‘Danica Patrick’s Panties In A Wad.’”

“After such a lackluster start to the season,” Harvick said, “it’s satisfying to finally post a finish worthy of my sponsor, Budweiser. It’s great to be associated with the Budweiser brand and its mascots, such as the Clydesdales and the Dalmation, which, up until Bristol, have both been considered faster than my No. 29 Chevrolet.”

10. Juan Montoya: A promising day at Bristol was derailed near the halfway point at Bristol when a loose right-front wheel forced Montoya to pit on lap 247. The No. 42 Target Impala dropped two laps down, and Montoya struggled to a 24th-place finish, three laps down.

“A loose wheel for a loose cannon,” Montoya said. “I was three laps down and even I considered taking Kyle Busch out of the lead. Of course, it wouldn’t have been for the lead, but it would have made good Target practice for the next time. What gives, Carl Edwards? Of all times, this was one when ‘Thunder Valley’ actually needed some ‘thunder.’ As it turned out, Carl was ‘all talk;’ the race was ‘no action.’”

Jeffrey Boswell
Previous article
FEDEX RACING EXPRESS FACTS — AUTO CLUB SPEEDWAY
Next article
Hot 20 over the past 10, as even a winless Jimmie Johnson remains the class of the field