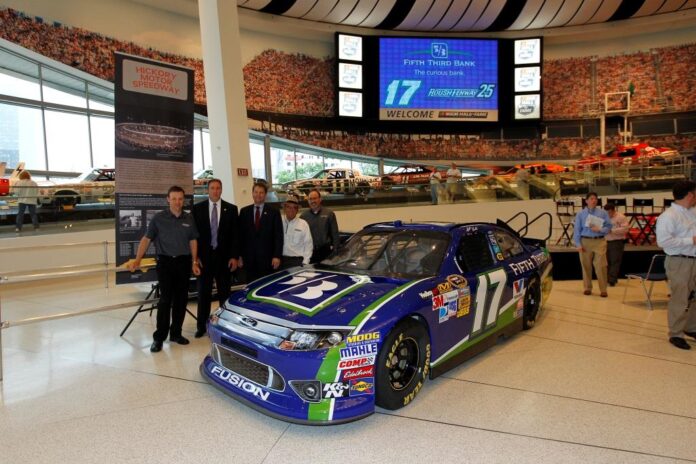 [/media-credit]CONCORD, N.C. (May 17, 2012) — Roush Fenway Racing’s two-time DAYTONA 500 Champion, Matt Kenseth, is no stranger to success at Charlotte Motor Speedway.  The driver of the No. 17 Ford has won every race in the portfolio at the 1.5-mile track, including an All-Star Race victory back in 2004.  This weekend, Kenseth looks to add another feather to his hat at Charlotte as he premieres brand new sponsorship from Fifth Third Bank aboard his No. 17 Ford Fusion.

Kenseth will make his 12th start in this weekend’s Sprint All-Star race where he has earned four top five and eight top-ten finishes over the years.  Kenseth is also one of only four drivers who have won all three Sprint Cup races at Charlotte Motor Speedway, including both Nationwide Series events.  The only others to have achieved the same accolade include Jeff Gordon, Mark Martin, and Dale Earnhardt.

Earlier in the week, Kenseth helped to announce a multi-year marketing partnership with Fifth Third Bank which includes sponsorship on Kenseth’s No. 17 Ford for a total of four races this season.  The announcement took place at the NASCAR Hall of Fame in uptown Charlotte Monday morning and included Kenseth, Roush Fenway owner, Jack Roush, and several executives from Fifth Third Bank.

Practice for the 2012 Sprint All-Star Race will take place on Friday, May 18 at Charlotte Motor Speedway as Kenseth will take his No. 17 Fifth Third Bank Ford Fusion for its first laps on track.  The Sprint All-Star Race broadcast coverage will be aired on SPEED Saturday, May 19th with television coverage beginning at 7:00 P.M. EDT and radio coverage provided by the Motor Racing Network.