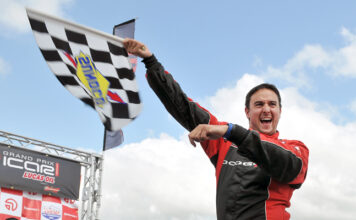 Ranger took the lead from D.J. Kennington on lap seven and led the rest of the way in his home province of Quebec.

“I really surprised to be at the front on the sixth lap at the beginning,” Ranger adds. “The car was really, really good, really fast. I was able to go everywhere on the track.”

A caution would come out on lap 27 to set-up a green-white-checkered finish, which resulted in a side-by-side battle between Ranger and Fitzpatrick.

“On the final lap, when Fitzpatrick was trying to pass me, he had a really good car,” Ranger says. “I knew I was a little bit better than him on the long run. He tried hard, he pushed me a little bit in the hairpin, but this is racing. I was able to keep my car inside and pass him after.”

This year, Ranger made the choice to come back to the NASCAR Canadian Tire Series full-time after spending some years in the states. The last time he ran the series full-time was in 2009 when he won his second championship.

“What we wanna do is win another championship,” Ranger says. “It’s fun to win definately, but we need to think about the championship. We don’t want to have mistakes. We’re here to finish in the top five every weekend and this is our goal. I think we have the team and the car to do it.”

The race was slowed due to caution four times for 10 laps.

The first caution came out on lap three for Isabelle Tremblay being stopped in turn 10. She would fail to finish the race due to a broken rear end.

The second caution came out on lap nine for Dexter Stacy being stopped in turn six. He would also fail to finish the race.

The third caution came out on lap 24 for Kerry Micks making contact with the wall in turn two. He would get the lucky dog under the final caution and finish 21st.

The final caution came out on lap 27 for Mike Scholz being stopped in turn two.

Fitzpatrick remains the points leader, now one point over Ranger. Kennington and Steckly both sit seven points back heading to the first oval race of 2012 on June 16 at the Speedway at Canadian Tire Motorsport Park.