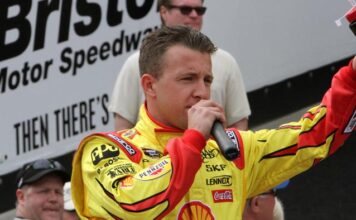 Maybe a career has been destroyed.  Just like the teacher I once knew who was accused of unthinkable acts, lost his job, but exonerated.  It didn’t make much difference.  From the time he was accused, he was guilty in the world of public opinion.  He survived because he wasn’t A.J Allmendinger, the driver of the No. 22 Penske Dodge.  It’s unlikely that Allmendinger will be as lucky. The teacher survived and went on to do work in another field, but all Allmendinger knows is racing and that career is in jeopardy.

What drug did he test positive for? It’s a secret and NASCAR isn’t telling. Heroin? Marijuana? Alcohol? NASCAR’s policy says they won’t disclose the drug. Therein lays the problem.

Most of us support the testing of drivers, crew members, and anyone else that has anything to do with NASCAR racing, but the fact that the drug is not disclosed leaves a lot for speculation.  Most of that is bad.  Major League Baseball tells us the drug that the player tested positive for and gives us a reason why the player is suspended. Not NASCAR.  Many people want to know How to Beat a Drug Test – Health Street, you can learn what works and what is pure myth.

It takes me back to long ago when Tim Richmond was banned from the sport. The unofficial line was that Richmond has huge amounts of Tylenol in his system. In fact, Richmond was suffering from AIDS. Yes, it was early when AIDS was not understood, but the secrecy was more than I could stand. What was the problem?

Late Monday, Allmendinger and Penske Racing requested testing of the “B” test (each driver gives the testing facility, Aegis, two samples), which could exonerate Allmendinger, but what damage has been done to this driver’s career.  If it had been revealed what driver he was tested positive for, it might give sponsors, fans, and the sport a better idea of what is going on here.  Only a court order in the Jeremy Mayfield case let us know about the details of the case.  It’s likely that this is something that the promising driver will live with for the rest of his career.

It’s time for NASCAR to reveal the reason for suspensions and what the drug is that the drivers are suspended or temporarily suspended for.  It happens when cars are found not to be in line with the rules. It happens when driver steps over the line in their dealings with the press or the rules. Why not on drug testing? Do drivers have to spend huge money with attorneys to reveal their infractions when it comes to a drug test?

Luckily it’s only happened twice.  The first was Jeremy Mayfield and the events afterward were pretty evident, but it should be revealed immediately so that a career is ruined in the meantime.

Ron Fleshmanhttp://www.ris-news.com
Ron Fleshman has followed NASCAR racing since attending his first race at Martinsville Speedway in 1964. He joined the Motor Sports Forum on the CompuServe network in the 1980s and became a reporter for Racing Information Systems in 1994. In 2002, he was named NASCAR Editor for RIS when it appeared on the World Wide Web as www.motorsportsforum.com. He can now be found at www.ris-news.com. Ron is a member of the American Auto Racing Writers and Broadcasters Association. You can find Ron following and reporting on the top three NASCAR divisions each week. As a lifer in his support of racing, he attends and reports on nearly 30 events a year and as a member of the motor sports media, his passion has been racing for 47 years. He lives with his family in rural West Virginia and works in the insurance industry when not on the road to another track.
Previous article
Matt Kenseth – NESN National – New Hampshire Advance
Next article
NAPA Racing/Martin Truex Jr. New Hampshire Motor Speedway Preview