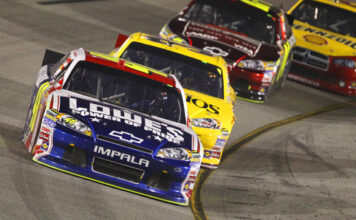 A guy grabs you and pushes you around. The universally accepted response is a punch to the other guy’s head. My dad taught me that, and so I taught my sons. It is a simple case of cause and effect, you push to start a confrontation and a punch usually will end it. Personally, I might remember once where I was so involved.

Casey Mears and Marcos Ambrose are not known for it. Neither are Jeff Gordon and Jeff Burton, but it happens. Mears got $15,000 for shoving, Ambrose $25,000 for punching, and both got a month’s probation. In hockey, what they did was worthy of a two minute roughing penalty, but “have at it boys” seems to be much more genteel than we once thought. Genteel, as in free from rudeness or vulgarity. My favorite definition, though, is “marked by false delicacy, prudery, or affectation.” This is NASCAR. If what took place after the Richmond race is worthy of $40,000 in fines, Lord knows what a real donnybrook might be worth.

Genteel is something no one has ever accused Juan Pablo Montoya as being. I remember his on-track discussion with Kevin Harvick at Watkins Glen back in 2007. Montoya has a Top Five to show for his first three starts back in IndyCar this season, and NASCAR fans get to see him back in a stock car soon enough. In June, he will drive for Penske at Michigan, and again in July in the Brickyard 400. I sure hope he acts like a gentleman. We would not want any of our sensitivities upset by any form of rudeness.

Do you remember Dale Earnhardt’s last race and his one finger salute to rookie Kurt Busch? I guess the Intimidator was just being welcoming and couldn’t get those other four fingers through the window net.

This is the year where wins mean damn near everything. It seems no one told Jeff Gordon, who remains the steadiest driver thus far in 2014 and he was not picked up a single victory as of yet. Heck, Matt Kenseth does not seem to be hurting as we head to Talladega, even though he also has not shaken the bubbly post-race. Even taking into account our extra 22 point bonus for winning (up to a max of 70 points for a win) both Gordon and Kenseth are doing just fine to remain among our top drivers of the season.

Ron Thornton
A former radio and television broadcaster, newspaper columnist, Little League baseball coach, Ron Thornton has been following NASCAR on this site since 2004. While his focus may have changed over recent years, he continues to make periodic appearances only when he has something to say. That makes him a rather unique journalist.
Previous articleExpect Trend of Nail-biting Finishes to Continue at ‘Dega
Next articleMike Stefanik Humbled Awaiting Hall of Fame News