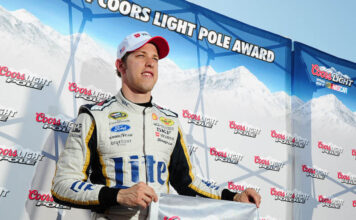 Brad Keselowski, driver of the No. 2 Miller Lite Ford, and Team Penske did it again, capturing the pole for the FedEx 400 benefiting Autism Speaks at Dover International Speedway with a new track record of 164.44 mph.

This was Keselowski’s fifth pole in the Cup Series and his second pole, as well as his tenth top-10 start in 2014. Keselowski also ripped off his Monster Mile rookie pole stripe, scoring his first pole in nine races at Dover.

“It’s been a good year for qualifying,” Keselowski said. “And for most years that has not been the case. Very happy because pit road selection is so important here. We are very pleased with our qualifying position.”

Keselowski credited Team Penske’s total package for the success that he and his teammate Joey Logano have had so far in qualifying.

“Speed is the backbone of any success in this sport,” Keselowski said. “But being the backbone it is not the totality. There are ancillary things that you also have to work on with these cars. We are executing and we need to keep that up.”

“We are qualifying a lot better than this time last year,” Keselowski continued. “I think the cars are better and Ford has done a good job, especially with the nose. We needed those pieces that were outside our control to fall into place.”

“This is a good start to the weekend.”

For pole sitter Keselowski, as well as Kyle Busch, who qualified second and Joey Logano, who will start behind his teammate in the third spot, watching the sky was also important to their qualifying efforts.

“At a track that is concrete like the Monster Mile, it doesn’t attract as much heat as the black asphalt does, but the sun does make a difference,” Keselowski said. “I missed the clouds by about a minute. We still put down a good lap but the track probably had a little more speed in it.”

“The car was really fast in practice, Kyle Busch, driver of the No. 18 M&Ms Peanut Butter Toyota, said. “I really liked it but just wasn’t able to get the speed and kind of slowed down. Just couldn’t quite get enough for that lap.”

“I think a lot of people were just waiting there and waiting on that cloud,” Busch continued. “We were trying to go as late as we could to see if the track would cool down.”

“We were fast but came up a little short,” Logano, driver of the No. 22 Pennzoil Ford, said. “We picked up a lot of speed from practice and made some good adjustments. It just was over adjusted a little bit from the first to the second run.”

“I think everyone was looking for that cloud,” Logano continued. “We were staring at the clouds and I saw all the crew chiefs staring up into the sun. We were doing the same thing and maybe we were chasing ghosts.”

Kyle Larson, driver of the No. 42 Cottonelle Chevrolet, was the highest qualifying rookie.

“It was pretty good for us ending up fifth,” Larson said. “We had a good car in practice and we worked on it there a little bit. I’m happy with a top-5 starting spot for Sunday’s race. If we get our car a little better, we should be right up there in the front.”

“Sometimes I like this place and sometimes I think it’s awful,” Larson said. “It depends how good the car is because this track is definitely tricky and on the edge. But I feel like I’m pretty comfortable around here. It’s like Bristol and I like that place.”

The full run-down of the FedEx 400 qualifying results, including manufacturer and speed in miles per hour are as follows:

Mary Jo Buchanan
Mary Jo has lived and breathed racing since her days at local dirt tracks. From her vantage in the pits, she has developed an interest and expertise in all levels of racing, from go karts to the Cup Series. Many of her articles focus on the "behind the scenes" racing world, as well as up and coming drivers. Mary Jo enjoys writing about the people that make NASCAR and racing work on a day-to-day basis. She recently won an NMPA award for spot news writing. Mary Jo can also be followed on Facebook and Twitter.
Previous articleMark Dilley To Make OSCAAR Super Late Model Return At Kawartha Speedway
Next articleKyle Busch Dominates Lucas Oil 200 at Dover International Speedway