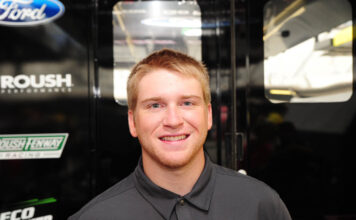 Chris Buescher, driver of the No. 60 Ford for Roush Fenway Racing and current leader of the point standings in the XFINITY Series, is ready to take on the Monster Mile this weekend in Dover, Delaware. But he does so only with a little help from his family and friends.

“Dad was really the guy who got me into racing first of all,” Buescher said. “He was never in racing himself but he was a fan and went to races in Daytona and at Texas Motor Speedway. He was always a hot rod guy, working on something in the garage.”

“So I would always try to go out there and help, although I think by helping I probably slowed him down more than anything.”

“That’s how we got started,” Buescher continued. “We got into motorcycles, Bandoleros which is kind of a strange way to come into racing because most guys go the go-kart route. We had a motocross track about 45 minutes from us in Texas so it made sense to try it.”

“We went out there on weekends when I was 6 to 9 years old. It was pretty cool loading up the back of the truck, go racing and see what happens. I had a really good time with it. Then I flipped over the handlebars, got run over by a kid at one of the races that my mom came to and that kind of nixed that program. She was over it.”

“That’s when I got into Bandoleros and Legend cars, with four tires, roll cages and seat belts. We convinced Mom that was safer. We did that for several years, three years in Bandoleros. In the Legend cars, we really started traveling quite a bit all over the East coast. Dad would come out, work in the shop and spectate.”

“A lot of it, my Dad was able to come to, especially early on. Then our crew chief Michael took care of things during the week while Dad was at work. I’d get out of school early on Friday and ride with him to wherever we were racing and then Dad would fly in for weekends if we were on the East coast.”

“But it got to be with Dad’s work that it was a little harder for him to make every race. So, he had to spread them out a little bit more.”

“It’s the same way now because Mom and Dad started their own company a couple years ago and are trying to get that up and running. So, they don’t get to make it to many races anymore. They are trying to do better this year so we’ve seen them about two or three times so far, most recently in Charlotte.”

“My Dad really has been the guy that has been my role model coming up.”

In addition to his family, Buescher also acknowledged that he has gotten some help from some important friends in his racing career, especially from Cup Series driver David Ragan.

“The whole Ragan family was really a huge help for me coming up,” Buescher said. “When I was thirteen years old and coming up to around fifteen years old racing Legend cars, Ken Ragan, David’s father, was doing the 600 Series and I got to know him.”

“David was just getting his feet wet in a Roush truck. We got to be good friends and we saw how he was progressing. It got to the point where Ken felt that David was making it in his career and was moving forward. He told me if I could commit to moving out to North Carolina that he would help me do the same.”

“Mom and Dad couldn’t move out to Charlotte. I have two little sisters at home and they are very involved in school and gymnastics. So, Ken said I should move in where David moved out and he would take care of me.”

“So, with Ken, Beverly and Adam, they helped me get hooked up with Roush. I worked in David’s shop for a couple of years before I was able to work at Roush.”

“I still talk to David a lot, especially when the 34 Cup deal came about. I was able to talk to him about that and run through what his thoughts were on it.”

“It’s been a great relationship and I owe them everything.”

Buescher has also found help from his crew chief, pit crew and race team as he gets set to tame Miles the Monster for the Dover race weekend.

“The relationship has gotten a lot better with my team,” Buescher said. “It was never bad, but last year, everyone was new. Everybody had come from different teams and shops and organizations. It was kind of a mix and match crew.”

“Everyone has worked really hard together and we’re getting to the point where everyone understands each other, knows their jobs and are doing them effectively and efficiently. It’s gone really well.”

“Scott (Graves, crew chief) has done a great job this season,” Buescher continued. “He is kind of quiet like me and we work really well, keep quiet on the radio and get a lot done. At the end of last year, I felt like we finally found a bit of momentum.”

“Unfortunately, Homestead was the last race and I didn’t want it to be the last one. So, we wanted to build off that momentum and we have done just that. We fired off really well and the team has done a nice job every week to make sure that we have fast Fords and that they stay together.”

“Our pit crew has been doing an amazing job and ripping off great stops,” Buescher said. “They have been at least keeping us even or gaining every time we hit pit road. So, that’s been a huge part of it, making sure we don’t give up anything on pit road.”

“And then when they gain in a time when track position is so important, that’s huge. So, we owe them some props as well.”

So, what does the young racer think of the Monster Mile and what are his predictions for the upcoming XFINITY race?

“The first race last year, we just about wrecked down the back stretch with me being too aggressive too early. That took a year or two off my life as close as that one was.”

“At the end of this race weekend, honestly I feel like we have a chance to win this race,” Buescher said. “This could easily be a top-five race for us. Our Bristol program, Iowa program were good and what we ran fourth with at the last Dover race were all good.”

“I’ve no doubt we will be a contender but we will have to find ourselves at the race place at the right time.”

Thanks to the help and support that he has received from family and friends, Buescher also has his eyes not only on a win at Dover but also on the ultimate prize.

“We’ve been able to hang onto the points lead and we are making good progress toward a championship run,” Buescher said. “Our stuff has been good and for the most part, we’ve been in the hunt.”

“The top fives have been racking up and as long as we can stay there, we can get wins,” Buescher continued. “It’s early to talk about points and I’m not particularly a points racer but I do realize the significance of it and how much it would mean to our team, to the Roush Fenway organization and to myself to win that championship.”

“So, we are going to keep it in our mind for sure and hope to be there at the end.  We’re winning races, running really well and we know with that, everything else will come.”