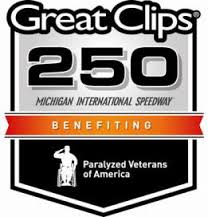 Larson on ParkerStore returning as a partner: Pretty cool to still be racing with @ParkerStore. Glad to have them back with @TeamHSMCG.

LARSON LOOKS FOR A STRONG RUN IN THE IRISH HILLS

After an off weekend for the XFINITY Series, Larson returns to make his fifth start of the season and third at Michigan International Speedway (MIS) this weekend. In two previous starts at the 2.0-mile speedway, Larson has one top five and two top-10 finishes. He has an average starting position of 7.5 and average finishing position of 5.0. His best start was fourth in 2014 and best result was second in 2013.

WELCOME TO THE FAMILY

On Friday, June 12 beginning at 10:40 a.m. EDT, Larson and ParkerStore will have a special announcement in the deadline room of the media center at MIS. All credentialed media are encouraged to attend.

While Larson is driving the ParkerStore Chevrolet Camaro this weekend, Brennan Poole was behind the wheel of the DC Solar Chevrolet Camaro two weeks ago in Dover. Poole started 18th and, within the first half of the race, made his way into the top 15. Poole was the beneficiary of a free pass back onto the lead lap early in the race. Within the final 50 laps of the race, Poole began to run some of his fastest laps of the day and fought his way up to 12th. This marked Poole’s fifth top-15 finish in eight XFINITY Series starts.

“Michigan is a fast track that usually has multiple grooves, which is good for us as drivers. It’s one of my favorite tracks. Qualifying will be key because the race typically has long green-flag runs, so starting up front will be important. I am very excited to be back behind the wheel of an XFINITY Series car, especially with ParkerStore on the side this weekend.”

“Michigan is a challenging track. Races tend to have long green-flag runs with very few cautions. Fuel mileage will be important since the pace of the race is really fast. Since the track is so wide, you will see multiple-groove racing once the tires wear out. Everybody wants to do well in their auto manufacturer’s backyard, so the key will be finding the balance between straightaway speed and handling.”

ParkerStore is a global network of independently-owned Industrial Retail™ operations developed to support Parker customers in the MRO market, along with mobile solutions including ParkerStore Hose Doctor® vans and ParkerStore Onsite Containers. In all, there are more than 3,900 service points around the world.