The Final Word – Kentucky is wide open for 2017, but the even years belong to Brad Keselowski 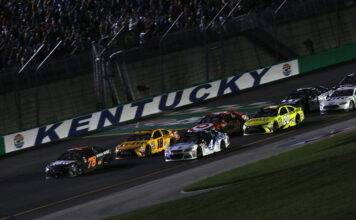 Saturday night, Keselowski claimed his third Kentucky contest in six attempts. With the tank running dry and the competition diving down pit road for a top off on fuel, Keselowski just kept going on and on and on to the finish. He managed to turn around to capture the flag, but after that, he was powered by the front bumper of a tow truck. For him, Sonoco was good to the very last drop.

Four wins on the season, at the top of the charts in the standings, three wins and eight Top Tens in his last 10, with a worst finish of 15th in that span. It would appear all is well in Brad’s world. For others, it appears they were traveling behind a honey wagon last weekend.

Ricky Stenhouse Jr. is trying to at least stay within hailing distance of a Chase place. That cause was not helped a wit in Kentucky. A blown tire just nine laps in and he was toast and dead last. Joey Logano has a win and is high in the points, so when he pounded the wall with just 52 gone and more than 200 to go, it was not as devastating but he was just as parked.

A.J. Allmendinger picked up five big needed points, but maybe just taking the day off would have been better. He got caught up in a multi-car wreck, then got pasted into the fence even worse later on, injuring his thumb while he was at it. Ryan Blaney is dropping further and further from contention, this time, he and fellow rookie Chase Elliott found themselves emulating synchro swimmers in a lovely choreographed dual spin. Neither were to finish in the Top 30. As for Jimmie Johnson, he did not go unnoticed, but that spin 33 laps in did the damage, and the time to make repairs left him behind Elliott on the day, and that was not good.

Carl Edwards was second best on the day while others with a Chase place also finishing in the Top Ten include Ryan Newman, Kurt Busch, Jamie McMurray, Matt Kenseth, Kevin Harvick, and Martin Truex Jr. Tony Stewart was fifth and is 31 points to the good in making his win count toward a championship run. Greg Biffle was sixth, but a win might be what it takes to be in at this point.

Only McMurray appears to have much heat behind him as they move on to New Hampshire on Sunday. He goes in with a 10 point lead over Bayne, with Kasey Kahne 16 off the pace, and Blaney 23 back in the weeds.

Kahne has won there before, while McMurray has not. Going back to September of 2002, only five of the 27 races there were not claimed by someone not currently holding a place in the Chase. Only Kahne (once), Clint Bowyer (twice), along with Brian Vickers and Mark Martin are the anomalies. As for Brad Keselowski, he did not win it last year, but he did in 2014. Do I need to remind you that this is one of those even years?

Ron Thornton
A former radio and television broadcaster, newspaper columnist, Little League baseball coach, Ron Thornton has been following NASCAR on this site since 2004. While his focus may have changed over recent years, he continues to make periodic appearances only when he has something to say. That makes him a rather unique journalist.
Previous articleGenesis Brake Light Systems Partners with JR Motorsports
Next articleDiabetes Awareness Advocate Jeff Gillis to ‘Ride’ with Ryan Reed in Loudon