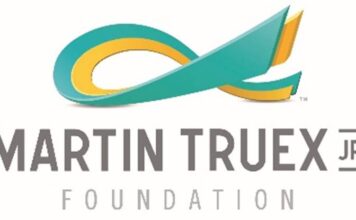 MOORESVILLE, N.C. (Aug. 27, 2018) – The Martin Truex Jr. Foundation is again hosting an event that lets race fans turn left and right in competition against their friends and professional racers and, in turn, raise awareness and funding in the fight against childhood and ovarian cancers.

The 2nd annual Karting Against Cancer relay race will take place Sept. 25 beginning at 3 p.m. ET at the Go Pro Motorplex in Mooresville. The two-to-six-driver teams, made up of race fans, team members and even a few familiar race car drivers will compete in the two-hour endurance race on the 11-turn, 0.7-mile road course.

Martin Truex Jr., the 2017 NASCAR Cup Series Champion, and long-time girlfriend Sherry Pollex will both be competing though against each other on separate teams.

“Last year’s race was a great success and a lot of fun for the racers and the fans so Sherry and I are proud to be doing it again this year,” said Truex, who has won four races this season and is currently third in the point standings. “We’re hoping to see a few more teams and a few more NASCAR drivers compete this year which should bring out even more fans and make the event even more successful.”

Drivers must be 16 years of age or older with a valid driver’s license. The Go Pro Motorplex will provide each driver with a kart and safety gear.

Family and friends are encouraged to attend to cheer on their favorite driver and team. A suggested donation of $5 per spectator is appreciated.

The Martin Truex Jr. Foundation donated $1.2 million to Novant Health in Charlotte during its ninth annual Catwalk for a Cause fundraising event in May. The donation helped establish the Novant Health Martin Truex Jr. Foundation Children’s Emergency Department in Huntersville, North Carolina, and the SherryStrong Integrative Medicine Oncology Clinic in Charlotte, North Carolina.