NASCAR’s Jeb Burton Highlights Sportsman Channel Show: “Crossroads with the Burtons” on His Car in Richmond 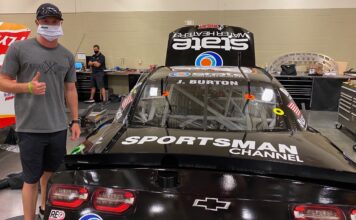 DENVER (September 9, 2020) – NASCAR rising star driver Jeb Burton pulls double-duty this weekend while driving his NASCAR Xfinity Series race at Richmond Raceway. As a driver, Burton will look to score points in the NASCAR Xfinity Series and promote his Sportsman Channel show Crossroads with the Burtons(Tuesdays at 7 p.m. ET).

For Burton, racing is in his blood. But, when the Halifax, Virginia native is not behind the wheel of his NASCAR Xfinity Series stock car, Burton can be found outdoors enjoying a hunting and fishing lifestyle that takes him far away from the fast-paced motor speedways of his “day job.”

Viewers of Sportsman Channel will have a chance to continue to see what happens behind-the-scenes as Burton and team, including his father – former NASCAR driver and 2002 Daytona 500 champion, Ward – and wife Brandi, present an all-access pass to pit road and beyond in Crossroads with the Burtons.

The show, in its second season, focuses on Jeb Burton and his life on-and-off the speedways of NASCAR while also featuring his passion for hunting, conservation and the outdoor lifestyle.

“Crossroads with the Burtons give viewers an inside look at the life of a professional stock car driver, son, husband, friend, outdoorsman and conservationist,” Burton described. “Viewers will get an up-close-and-personal look at the raceway and then watch us ramble the back country for elk and other game. Hopefully, they also come away thinking ‘these folks aren’t so different from me…except they race stock cars for a living!’”

“The Burtons are well-known in both the racing and outdoor lifestyle communities and we are excited to have them appear on Sportsman Channel,” Outdoor Sportsman Group President and CEO, Jim Liberatore said. “We are doubly excited that Jeb, as a rising young star in NASCAR, is willing to share his other passion on camera, as well as help educate the public about conservation.”

Crossroads with the Burtons airs on Tuesday nights beginning at 7 p.m. For more information about the show, visit: www.thesportsmanchannel.com.

About Sportsman Channel: Launched in 2003, Sportsman Channel/Sportsman HD is a television and digital media company fully devoted to honoring a lifestyle that is celebrated by millions of Americans. A division of Outdoor Sportsman Group, Sportsman Channel delivers entertaining and informative programming that showcases outdoor adventure, hunting and fishing, and illustrates it through unique and authentic storytelling. Sportsman Channel embraces the attitude of “Red, Wild & Blue America” – where the American Spirit and Great Outdoors are celebrated in equal measure. Stay connected to Sportsman Channel online at thesportsmanchannel.com, Facebook, Twitter and YouTube. #IAmSportsman. #MyOutdoorTV

JRM at Las Vegas: In 52 NXS starts at Las Vegas Motor Speedway, JR Motorsports has one win, 20 top-five and 32 top-10 finishes. NASCAR Hall of Famer Mark Martin scored the organization’s lone victory at the 1.5-mile speedway in March of 2008. This victory was the first of 51 for JRM as an NXS team.
Read more
XFINITY Series PR

DOGECOIN BETS WITH SPRINGRATES ON PARSONS IN VEGAS