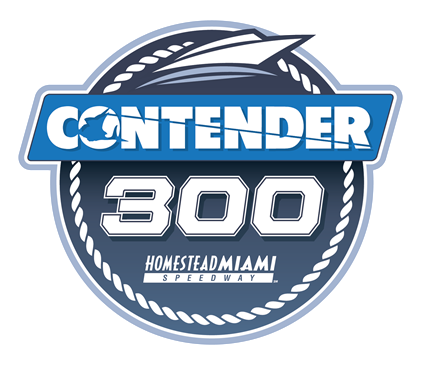 Contender Boats 300 to be run on Saturday, February 27

HOMESTEAD, Fla. (Jan. 12, 2021) – Homestead-Miami Speedway and Contender Boats have been neighbors for more than 25 years and partners for the past 10.  Now, the two Homestead landmarks have taken their relationship to another level.

Contender Boats, a Homestead-based premium boat manufacturer, signed a multi-year contract to serve as the entitlement partner for the NASCAR Xfinity Series race at Homestead-Miami Speedway.  The 2021 race – the Contender Boats 300 – will be held on Saturday, February 27 and starts at 3:30 pm (FS1).    This will mark the second straight year in which Contender has been the entitlement partner for an Xfinity Series race at Homestead-Miami Speedway. The doubleheader weekend culminates with the NASCAR Cup Series Dixie Vodka 400 on Sunday, February 28.

“Contender Boats not only is recognized as one of the leading boat manufacturers in Florida, but they have been a fixture here in Homestead for many years,” said Homestead-Miami Speedway President Al Garcia. “Our relationship with them dates back a decade, and we are excited that this entitlement will continue in 2021 and beyond.  They have been providing excellence in premium boats for 35 years, and we congratulate them on reaching this special milestone.”

Hosting the NASCAR Xfinity Series at Homestead-Miami Speedway is a tradition that goes all the way back to the initial opening of the track in 1995 when NASCAR Hall of Famer Dale Jarrett won the inaugural Xfinity Series event on the last lap after leaders Kenny Wallace, Hermie Sadler and Larry Pearson crashed, vying for the lead going into turn three. The track held two NASCAR Xfinity Series races last year, won by Harrison Burton and Chase Briscoe.

“Contender Boats is proud to be returning as the title Sponsor of the NASCAR Xfinity series race for the 2021 season at the Homestead Miami Speedway,” said Joe Neber, President of Contender Boats, which will also serve as the ‘Official Boat Manufacturer of Homestead-Miami Speedway.’ “We’ve had a long standing history with NASCAR and couldn’t be more excited about the partnership. Some things just fit together. We are looking forward to another fantastic race season and wish all the drivers a successful year.”

The venue will host a limited number of fans for both the Contender Boats 300 and the Dixie Vodka 400. Fans seeking tickets, as well as learning all safety protocol guidelines for the weekend, can visit www.HomesteadMiamiSpeedway.com or call 866-409-RACE (7223). Adult tickets start at just $35 for the Dixie Vodka 400 and $10 for kids 12 and younger. Kids get in free for the Contender Boats 300.

About Contender Boats
Contender Boats is a Homestead-based premium boat manufacturer.  For more than 35 years, Contender has built hand-laid fiberglass hulls that ride like no other. Built for performance. Built to fish. Models are available from 25 to 44 feet. Contender boats have a legacy of exploring the open oceans of the world. From the marlin rich waters of the Caribbean islands to up and down the eastern seaboard and far beyond, you’ll find Contender Boats “Always In the Game.” To learn more about Contender Boats, visit https://contenderboats.com/  or follow on Facebook at  (Contender Boats Inc) and Instagram @contenderboatsofficial.