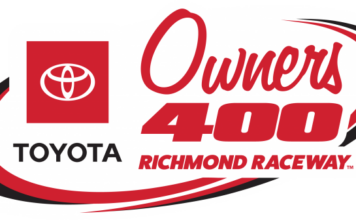 The NASCAR Camping World Truck and Cup Series visited the Richmond (Va.) Raceway this weekend after a weekend off for Easter. The Front Row Motorsports (FRM) teams and drivers were eager to go back racing.

Todd Gilliland and his No. 38 Pete Store Ford F-150 team impressed on Saturday with a sixth-place finish in the NASCAR Camping World Truck Series 250-lap event. It was the best finish of the weekend for the organization.

Michael McDowell and his No. 34 Love’s Travel Stops Ford Mustang team led the Cup program with a 27th-place finish.

For Gilliland, the No. 38 Pete Store team came into Richmond after a fourth-place finish at the Bristol Motor Speedway. Another short track, Gilliland felt confident the team was going to have a great race. They spent the past two weeks preparing the truck and had a good setup for the sometimes tricky Richmond Raceway.

From the green, Gilliland showed speed. In Stage 1, Gilliland paced himself inside the top-10 before making up a few positions at the end of the Stage. He was eighth heading into Stage 2.

The Pete Store Ford F-150 was just as fast in Stage 2. Gilliland raced as high as sixth before finishing the Stage in eighth again. The team made adjustments for the long run and the final laps of the race. But, with numerous cautions, it was difficult for Gilliland to find a rhythm.

At one point, after a restart, Gilliland was up to third, but another caution waved and the team had to pit for tires. The team raced from 10th back up to sixth, but was as fast as fourth. Gilliland just missed another top-five, but still had an impressive day.

Gilliland remains ranked ninth in the championship run, but is only one point out of eighth.

“We were in the top-10 all day. We ran as high as third, but got jumped by some of the guys on pit strategy. Restarts were really important, too. But it’s another good, solid day that keeps the momentum moving in the right direction. We’ll go prepare another strong Ford F-150 for Kansas. Thanks for The Pete Store for their support of FRM and our truck team. We’ll keep working.”

Michael McDowell and his No. 34 Love’s Travel Stops Ford Mustang took the green flag in Sunday’s 300 Mile event from the 23rd position at Richmond Raceway.

During the Competition Caution on Lap 32, McDowell told the team that his race car was “tight in the center (of the corners). It feels like our long run speed is going to be ok” and would pit for 4 tires, fuel and a trackbar adjustment before going on to finish Stage 1 from the 28th position.

In Stage 2, the No. 34 Love’s Travel Stops Ford Mustang would see two green flag, fuel only pit stops as the lack of cautions made it difficult for teams to make adjustments on their race cars without suffering the loss of a lap, to which McDowell would take the second green-white-checkered flag from the 27th position.

During the Final Stage of Sunday’s 400 lap event, McDowell continued to battle for track position, however long green flag runs once again limited the team’s ability to make any large adjustments to their No. 34 Love’s Travel Stops Ford Mustang and McDowell would go on to take the checkered flag from the 27th position at Richmond Raceway.

“It was a tough race for our No. 34 Love’s Travel Stops team at Richmond Raceway. We started out on the tight side of things and just struggled to roll the center of the corners. I felt like our long run speed was pretty decent, but unfortunately we went a few laps down and with the limited amount of cautions, it just made it difficult for us to regain the Lead Lap. Looking at the positives, we certainly learned a few things, which we’ll add to our notebook for when we come back to Richmond (Raceway) in the fall. I wish we could have had a better finish for our partners, but I greatly appreciate the support of Love’s Travel Stops and hopefully we can go out next weekend and deliver another solid superspeedway performance for them at Talladega (Superspeedway).”

Alfredo made his Richmond Raceway debut on Sunday. The short truck was tough on the team throughout the day, but Alfredo gained a lot of experience on one of NASCAR’s most difficult tracks to master.

The MDS team started off with a car that was tight and lacked some drive off the turns that Alfredo needed. They made major changes at the Competition Caution and again at the end of Stage 1. Alfredo was 32nd and just could not gain the positions he wanted.

A lack of cautions on Sunday, Alfredo and the team didn’t have opportunities to tune on the handling. Neither did the rest of the field. The leaders had over half the field a lap down by the middle of the race and only 14 cars finished on the Lead Lap- many teams were multiple laps down.

Alfredo had to race with the cars on his lap and it wasn’t many. He would advance as high as he could on the track- even showing speed and passing cars in the top-20. But, Alfredo was just too many laps back after the select few such as Denny Hamlin, Joey Logano and Alex Bowman blistered the field.

Alfredo ended his race 31st. Although it was not a highlight finish, it was a lot of track time gained for future Richmond races.

“It was not a great day at Richmond. We just lacked raw speed, along with our teammates. Historically, as a group, this hasn’t been one of our strongest tracks. But, we’ll go back and do our homework to get better. I liked racing the track today, I feel good, but we just weren’t able to get the finish we wanted.”