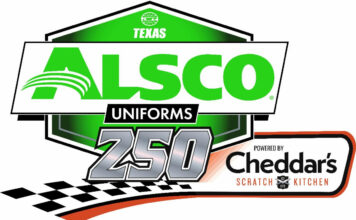 Welcome Aboard: This weekend at Texas Motor Speedway, SS GreenLight Racing and Joe Graf Jr. welcome G-Coin as the primary partner of the team’s No. 07 Chevrolet Camaro for Saturday afternoon’s Alsco Uniforms 250.

Texas marks the second of a multi-race deal where G-Coin, a product that brings gold into the digital age, making it accessible and giving it true utility will be the primary partner.

About G-Coin: Unlike cryptocurrencies, G-Coin is a digital title to a real asset: 1 G-Coin token equals 1 gram of Responsible GoldTM.

G-Coin combines the best qualities of traditional gold – stability, security, value, confidence, and social status – with the benefits of digital innovation, allowing users to easily save, send, and spend gold.

Tech-savvy investors keen to avoid cryptocurrency volatility, or physical storage burden and costs, are now able to purchase G-Coin digital gold tokens. G-Coin tokens can be purchased in increments of 0.01gram, giving individual investors better access to the gold market and the ability to use gold for day-to-day purchases.

G-Coin Wallets give users the freedom to send and receive value instantly, securely, and at no cost from the convenience of your mobile phone.

You can watch the official wrapping of the No. 07 G-Coin car here.

G-Coin Tip of the Week: There is no credit risk associated with owning physical gold.

The drivers behind gold supply and demand tend to be independent of, and sometimes opposed to, other traditional reserve assets (like currencies, securities, and bonds), making physical gold an effective diversifier for investment portfolios.

You Can Win $1,000 In Gold! To celebrate their new partnership with Joe Graf Jr., in the NASCAR Xfinity Series G-Coin will give away $1,000 in FREE gold to a lucky individual later this month.

To enter, download the G-Coin app on your smart phone and click here for official rules and to submit your entry.

Saving You Some Money: As summer kicks off, Joe Graf Jr.’s other marketing partner Z Grills wants to help the NASCAR community save money – but also enjoy the perfect barbecue.

On the heels of their third race partnership of the season last month at Dover (Del.) International Speedway, Z Grills Racing (ZGrillsRacing.com) is offering a 10 percent discount off your TOTAL purchase, using the code NASCAR at checkout.

In his two previous races, Graf Jr. finished 21st and 22nd respectively. In his most recent trip to the Forth Worth, Texas race track, Graf Jr. contended for a top-10 finish before becoming a victim in a multi-car accident on Lap 169 of 200.

Fun Fact: On Saturday’s Graf Jr.’s Miniature Goldendoodle Sebastian will celebrate his first Birthday. Sebastian often travels with Graf and girlfriend Taylor locally during the week to GoPro Motorplex in Mooresville and at Millbridge Speedway.

Joe Graf Jr. Xfinity Series Career Intermediate Nuggets: At tracks greater than 1.0-mile in size, Graf has competed in 24 NASCAR Xfinity Series races. He holds an average starting position of 24.3 and an average result of 23.5.

Put Me In Coach: In an effort to strengthen his physique, Joe Graf Jr. began working with new trainer and former NASCAR Cup Series Josh Wise during the offseason.

In addition to Wise, Graf has also been working with former NASCAR driver and open wheel driver Scott Speed on being more discipline behind the wheel of his No. 07 G-Coin Chevrolet Camaro.

Sneaker Mania: Along with the adrenaline of Motorsports competition, Joe Graf Jr. also has a vogue for hype sneakers. In his current collection, he owns and wears at least 80 limited edition sneakers – and his collection continues to grow every month.

The current estimated value of his collection tops $90,000.

He will crew chief his 13th NASCAR Xfinity Series race as crew chief on Saturday afternoon.

Tyska joined SS GreenLight Racing in January after honing his skills in all three of NASCAR’s national divisions and working for teams like Germain Racing, GMS Racing and Rick Ware Racing.

Tyska was a part of Todd Bodine’s 2006 championship season in the NASCAR Camping World Truck Series at Germain Racing.

Hello From The Other Side: Graf Jr. has a teammate at SS GreenLight Racing. Cody Ware will drive the No. 17 Nurtec ODT Ford on Saturday afternoon.

Ware, a veteran racer is poised to make his 28th career NASCAR Xfinity Series start and second at Texas Motor Speedway. He returns to the 1.5-mile track for the first time since 2016 in Xfinity Series competition and looks to better a track-best of 36th.

“Texas is a very challenging mile and a half-track, but I embrace the challenge and I look forward to getting back there and putting a positive finish together for not only G-Coin but everyone on this SS GreenLight Racing team.”

On G-Coin Partnership: “This is a unique partnership, and I am excited to officially welcome G-Coin to NASCAR and our SS GreenLight Racing team.

“G-Coin is building an amazing ecosystem and we believe the NASCAR community will put G-Coin on the global map. Plus, we will strike gold in our No. 07 Chevrolet Camaro with some strong finishes on the track.”

On Recent Performances: “The last several races have been tough; however, it is during times like this that all your mental discipline and training really come to the forefront.
“I can’t stress enough the importance of mental toughness in overcoming obstacles you don’t control. We have an amazing pit crew, but two weeks in a row they have suffered late-race problems that ruined our day.

“When I look at the speed and balance of our cars this year they are much better than last year. That isn’t from luck. That is from the hard work and grind it out mental toughness of this team.

“It’s such a shame that we have had such a rough stretch, but this is no different than life. We all experience highs and lows in life. Like anyone at a low point, we are going to remain mentally tough and keep moving forward. We embrace the suck. We know it can’t last.

“Going forward we are going to focus on what we can control and continue to execute at our highest level. There are a ton of races left in the season and hopefully, we have shaken the bad luck. I would be worried if our cars lacked competitiveness, but they don’t. We have a lot of racing left and we are due for some good luck.”
Race Information:

As one of the most tenured teams in all of NASCAR, SS GreenLight Racing led by team owner and former driver Bobby Dotter has been a mainstay in the sport fielding entries in either the NASCAR Camping World Truck Series or the Xfinity Series competition since 2001.

SS GreenLight Racing will continue with a two-car program in the NASCAR Xfinity Series in 2021.