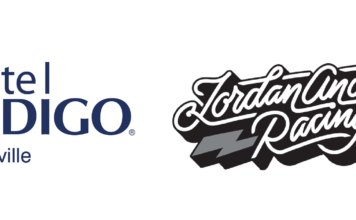 As a part of the new partnership, hotel Indigo Nashville Downtown will serve as an associate sponsor on the No. 3 Chevrolet Silverado during the NASCAR Camping World Truck Series (NCWTS) Rackley Roofing 200 on June 18, and on the No. 31 Bommarito Automotive Group Chevrolet Camaro SS during the NASCAR Xfinity Series (NXS) Tennessee Lottery 250 on June 19 that will be held at the nearby Nashville Superspeedway in Lebanon, Tennessee.

Long before downtown Nashville was filled with the twang of honky-tonks and the tunes of singer-songwriters, printing presses provided the soundtrack to the neighborhood. Soon after, speakeasies cemented the district’s rowdy reputation, with patron’s brown-bagging their own liquor to Printer’s Alley’s “mixing bars,” giving birth to a BYOB movement that continued after Prohibition’s repeal.

With the transformation of an early 1900’s bank, Printing meets Prohibition at Hotel Indigo Nashville Downtown, which brings the area’s past lives to the forefront of its design and artwork with a modern spin on the 161-room boutique hotel anchored by a restaurant and bar that complements traditional Southern food and drink.

The District Bar and Lounge is a popular chef driven locally sourced restaurant focused around entertainment featuring LIVE music seven nights a week located right in the lobby of the hotel.

“Traveling each weekend February to November the NASCAR schedule brings us to some amazing cities all around the United States enriched with incredible history and cuisine,” stated JAR President and Driver, Jordan Anderson. “I am excited for our team to pair with a brand that is big on local tradition and history all while providing modern accommodations to give us a sense of being right at home after being spending a long day at the track.”

In 2004, the first Hotel Indigo property opened its doors across from the Fabulous Fox Theatre in the eclectic arts and entertainment district of Midtown Atlanta. Today, hotel Indigo calls 143 culturally rich communities all over the world home, from New York to Paris, London to Shanghai, Hong Kong to Singapore— there is a hotel Indigo in all the places you’ve always wanted to visit and do business in.

This partnership is not just contained to JAR. Friends and fans of JAR are invited to also enjoy the benefits of this partnership by claiming savings on a stay at hotel Indigo Nashville Downtown during NASCAR weekend at Nashville Superspeedway by visiting the hotel Indigo Jordan Anderson Racing Page.

Tickets for both the NCWTS Rackley Roofing 200 and the NXS Tennessee Lottery 250 are still available for purchase by visiting the Nashville Superspeedway online.

If you are unable to make it to Nashville the NCWTS Rackley Roofing 200 will be aired LIVE on Fox Sports 1and the Fox Sports App at 8:00 PM EST on Friday night June 18. While the NXS Tennessee Lottery 250 will be broadcast LIVE on NBCSN and the NBC Sports App at 3:30 PM EST on Saturday afternoon June 19.

Both races will also be aired live on the radio on the Motor Racing Network and SIRIUS/XM NASCAR radio Channel 90.

About hotel Indigo Nashville
Located in Printer’s Alley, the Hotel Indigo® Nashville Downtown hotel sets the beat in downtown Nashville. Once a bank, you’ll notice hints of that heritage throughout our hotel, like the original travertine floors in many guest rooms and U.S. Post drops in our hallways. Today, join us in our printer-themed lobby with its own library and speakeasy-inspired lounge featuring local artists and songwriters 7 nights a week. Our District Bar & Kitchen serves locally inspired fare for breakfast, lunch and dinner, and we also offer four meeting rooms designed to host intimate receptions, boardroom discussions or cutting-edge seminars. Our location is convenient to the State Capitol, the Country Music Hall of Fame & Museum, the Entertainment District, Nissan Stadium, and the Ryman Auditorium.