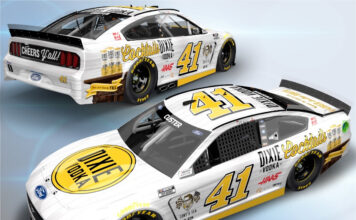 ● Custer and the No. 41 Dixie Vodka Tony’s Tea Ford for SHR join their Cup Series counterparts for Sunday’s historic debut at the 1.333-mile concrete oval that hosted NASCAR’s Xfinity Series and Camping World Truck Series events from 2001 through 2011. For only the fifth time in 16 races this season, the Cup Series will practice and qualify prior to Sunday’s main event. A 50-minute practice session is set for 2:05 p.m. EDT Saturday with qualifying set for 11:05 a.m. Sunday.

● Sunday’s race marks the 56th career start for the 23-year-old Custer, the reigning NASCAR Cup Series Rookie of the Year, and his 29th on an intermediate racetrack. He has one win – last July at Kentucky Speedway in Sparta – and six top-10 finishes in his previous 28 starts on intermediate tracks.

● Custer arrives at Nashville 27th in the Cup Series standings, 102 points behind the top-16 cutoff for the NASCAR playoffs, after his 20th-place finish in the most recent points-paying race two weekends ago at Sonoma (Calif.) Raceway.

● Launched in 2014 and based in Charleston, South Carolina, Dixie Vodka was established with the simple mission of creating an all-American premium craft vodka that represents the best of Southern flavor, craftsmanship and hospitality. With six signature flavors – including its flagship Southern Original, Black Pepper, Citrus, Mint, Peach and Wildflower Honey – Dixie Vodka partners with local farmers across the South to infuse regionally cherished ingredients into its award-winning products, each of which is six-times distilled from American corn. In 2020, Dixie Vodka was ranked the ninth-fastest growing spirits brand in the United States by the Beverage Information Group and remains the largest premium craft vodka produced in the Southeast. In partnership with the Southern-raised sport that transcends regional boundaries, Dixie Vodka is proud to serve as the Official Vodka of NASCAR and the Official Vodka of Stewart-Haas Racing. Dixie Vodka donates at least 1% of all profits through its 1% for the Planet program, a commitment to supporting non-profits that work to protect the future of the planet. A core brand within the Grain & Barrel Spirits portfolio – an innovation-driven beverage platform that develops and scales craft spirits brands led by founder Matti Anttila – Dixie Vodka can be found on Facebook and Instagram, and on shelves in more than 30 states. Tony’s Tea will be available soon.

● SHR revealed last month that Code 3 Associates returns to the No. 41 Ford Mustang for the July 11 race at Atlanta Motor Speedway. Code 3 Associates has been a hero to animals for more than 30 years. If disaster strikes, Code 3 will deploy its Animal Rescue Team to help in emergencies like hurricanes, fires and floods. Fans have the opportunity to have their name featured on the No. 41 SHR Ford and help Code 3 continue its rescue efforts by simply visiting Code3.cc/Cole41 and making a $41 donation.

What’s on your mind as the Cup Series heads to Nashville for the first time?

“I’m looking forward to it. I think the biggest thing is just going back to a town that really fits our roots, going to a country (music) town. I think it should be a great race. And being able to go back to that town and helping revitalize the racing atmosphere there, I think, is going to be awesome. I’ve never spent time in Nashville before, so I’m looking forward to actually seeing the city and going back there.”

Only a small handful of current Cup Series drivers have ever raced there. Do you have any experience on that track, and what do you expect?

“I’ve never raced there, I’ve only tested there. It was a little bit before my time when they raced there. It was so long ago, it’s really hard to remember. I think one thing you’ll see is a lot of changes in the track through the course of the weekend with all three series there, and the fact we get to practice and qualify. Being a concrete track, the rubber is going to build up and you’ll be able to maybe move your line around a little bit. I think that’s going to be one of the biggest things. It’s an interesting track with how both the frontstretch and backstretch are curved, how you kind of raise up and go into a hill in turn one. It’s an interesting racetrack and I think it’ll be cool to go there.”

Can you compare the layout to any other track you’ve raced on?

“I’d compare it to Kentucky, that’s probably the biggest one I’d compare it to. Kentucky happens to be where I got my first win, so hopefully it compares in a lot of ways. You look at the shape of them, and probably the banking relates some. You might be able to compare it to Dover a little bit, being a concrete track, so there might be some similarities there. But I would say it lends itself more to a bigger, mile-and-a-half track.”

What’s the excitement level among the drivers about racing at Nashville for the first time?

“I think everybody’s looking forward to it, to be honest. It’s a new track for the Cup Series, so it could shake things up a lot. The teams that are doing well right now, you might see a surprise winner when we go there because it is a new track that we haven’t been to. Also, I think people are also just looking forward to going to that city because it goes back to our roots a lot and everybody can relate to that city a lot.”

How would you assess where you are as a team with the season’s halfway point a week away?

“We definitely wanted to have a better year than we’ve had so far. After coming off a win last year and having a pretty solid season for a rookie year, we were expecting some bigger things this year and it just hasn’t been there. We’ve had some rule changes this year, and things haven’t really clicked, yet, the way they did last year. It’s just a matter of grinding it out. Everybody at Stewart-Haas Racing is working extremely hard to figure out how we can get some more speed. You’ve got to take it one week at a time and you’ve got to take advantage of every single one.”