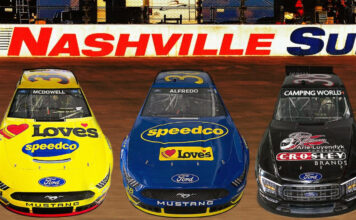 For the first time in over a decade, NASCAR’s premier series are returning to the Nashville (Tenn.) Superspeedway. Action kicks off Friday night at the concrete track measured just over one mile with the NASCAR Camping World Truck Series hosting a 150-lap race.

FRM then returns to racing at the track on Sunday for the NASCAR Cup Series competing in a 300-lap event.

Todd Gilliland is coming into Nashville with a familiar partner. Crosley Brands, a winner at the Circuit of the Americas in late May returns to the No. 38 truck with it’s special Arie Luyendyk tribute scheme. Crosley knows you don’t change a winning scheme and Gilliland agrees.

“You keep the good luck going,” said Gilliland. “Winning with Crosley Brands on our truck in Austin was really cool and we all thought it made sense to just keep the ‘mojo’ going. I have to thank Bo LeMastus for all his support. We can’t do this without all our partners.”

Gilliland goes into Friday night’s race having one of his best season’s in his career. With one win, the goal is to keep competing for wins. Gilliland knows he’ll be on equal footing at the Nashville Superspeedway.

Anthony Alfredo comes into the Nashville Superspeedway racing the Speedco scheme on his No. 38 Ford Mustang. Alfredo is looking for a great day with the company that has supported FRM for years.

“I’m proud to carry the Speedco and Love’s Travel Stops logo this weekend,” said Alfredo. “They are a staple at FRM and now I get my chance to run their colors. There is a lot of excitement building for this weekend and I think it’s going to be a lot of fun. I really can’t wait.”

Alfredo talks about his expectations this weekend.

“There are a lot of unknowns for so many people heading into Nashville. It’s been such a long time that cars or trucks have raced there. For me, it’s not too much different than a lot of the tracks that I’ve been too this year. There are races where my first lap on the track is the first lap of the race. So, I’m used to it.

“I just really think that the atmosphere of being near Nashville and NASCAR coming back to the track, we’re going to have a great event. I can’t wait.”

Michael McDowell again returns with the Love’s Travel Stops Ford Mustang this weekend. McDowell is coming off an impressive 12th-place finish in the NASCAR All-Star race and is now ready to get back into the championship chase.

“We’re ready to get back into the battle of the championship and continue to build our notebook throughout the summer,” said McDowell. “We’re totally focused on improving, gathering data and getting ourselves set for the fall. So, every lap is important to us right now.”

McDowell also knows that Nashville Superspeedway brings a unique opportunity to the team.

“This is a new track on the schedule. We are equal to a lot of the other guys. So, we have to see this an opportunity to get points. We have practice and qualifying, we’re back to what we know is a regular schedule. I think we have to be ready to make changes. That’s what we have worked on this week. We have shocks and springs ready and we’re going to work hard this weekend to have a good car on Sunday.”