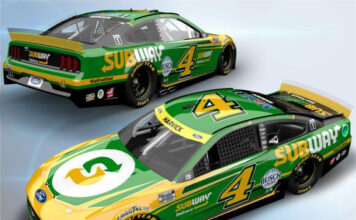 ● Kevin Harvick debuts a new partner this Saturday night at Bristol (Tenn.) Motor Speedway. Subway® restaurants has joined with Harvick and the No. 4 team of Stewart-Haas Racing (SHR) to put its Eat Fresh Refresh™ on the fast track by becoming a primary sponsor of the championship-winning NASCAR Cup Series team. The world’s largest quick-service restaurant brand is leveraging the partnership to highlight Subway Delivery powered by DoorDash, which allows guests to order their Subway favorites via the Subway app or on Subway.com. Guests can now earn and redeem Subway MyWay® Rewards points on Subway delivery orders as well. In conjunction with Harvick being one of the 16 drivers in the NASCAR Playoffs, Subway also announced a $0 Delivery fee on all Subway Delivery orders plus a 15 percent discount on a footlong for a limited time beginning Saturday when using promo code KEVIN15. Subway will return as the primary sponsor of the No. 4 Ford Mustang for the Sept. 26 race at Las Vegas Motor Speedway and the Oct. 24 race at Kansas Speedway in Kansas City. Subway will also serve as a major associate sponsor of the No. 4 car Oct. 10 at the Charlotte (N.C.) Motor Speedway Roval, Oct. 17 at Texas Motor Speedway in Fort Worth and Oct. 31 at Martinsville (Va.) Speedway.
● The Bass Pro Shops Night Race marks the third race of the 10-race NASCAR Playoffs. When the checkered flag drops, four of the 16 playoff drivers will be eliminated from championship contention. Harvick comes into Bristol ranked sixth, 25 points above the cutline to advance to the Round of 12. A win would punch Harvick’s ticket to the Round of 12, but even without a win, Harvick is in good shape. If he ends the race with a 31-point margin over the 13th-place driver, he will advance to the Round of 12. Harvick has advanced out of the Round of 16 in all seven of his attempts in the postseason since 2014.
● Harvick is the defending winner of the Bass Pro Shops Night Race. The driver of the No. 4 Subway Delivery Ford Mustang won last year’s race in dominating fashion by leading four times for a race-high 226 laps, including the final 32 tours around the .533-mile oval. Harvick beat Kyle Busch by .310 of a second to take his 58th career NASCAR Cup Series victory, his third at Bristol and his 35th since joining SHR in 2014.
● Harvick’s first NASCAR Cup Series win at Bristol came in April 2005. In his ninth start at the high-banked, half-mile, Harvick beat Elliott Sadler by an impressive 4.652 seconds for his fifth career Cup Series victory. It would be another 23 races before Harvick scored his second Bristol win. In the 2016 Bass Pro Shops Night Race, Harvick beat Ricky Stenhouse Jr., by 1.933 seconds to take his 33rd career Cup Series victory.
● How did Harvick do in his last race at Bristol? It doesn’t matter, because the track was covered in dirt. Harvick finished 15th on March 29 in the first NASCAR Cup Series dirt race since Sept. 30, 1970 at the North Carolina State Fairgrounds in Raleigh. It was Harvick’s first dirt race since competing in Tony Stewart’s Prelude to the Dream dirt late model event in 2009 at Eldora Speedway in Rossburg, Ohio. With 1,138 laps led on Bristol’s concrete and zero laps led when it was covered in dirt, count Harvick among the drivers happy to return to traditional racing at Bristol.
● The Bass Pro Shops Night Race will be Harvick’s 41st career NASCAR Cup Series start on Bristol’s concrete. He and Kurt Busch each have 40 starts at Bristol, the most among active Cup Series drivers. The only driver even close to them is Ryan Newman with 38 starts. In fact, there are only two other active drivers with 30 or more starts at Bristol – Denny Hamlin and Martin Truex Jr., with 30 starts apiece.
● Harvick has proven prolific at Bristol outside of the NASCAR Cup Series. He has made 29 NASCAR Xfinity Series starts at the track, winning five times and scoring 15 top-fives and 24 top-10s while leading 1,217 laps. Harvick has also made five NASCAR Camping World Truck Series starts at Bristol, winning once and finishing in the top-10 in his last four starts on the concrete surface.

Kevin Harvick, Driver of the No. 4 Subway Delivery Ford Mustang for Stewart-Haas Racing

Does your preparation change between the regular season and the playoffs, or do you keep doing what got you into the playoffs?

“Several years ago, if you were going to compete with the 48 car (seven-time champion Jimmie Johnson) on a week-to-week basis, you had to playoff race every week, and that’s always something Rodney (Childers, crew chief) and myself and the team have prided ourselves on. The preparation is no different. You prepare and do all the same things you do on a weekly basis to be able to compete at a high level. There’s obviously a lot more chatter about playoffs and first-round races and third-round races, and in the end I know those are great stories, but all that stuff is irrelevant to us. We’re week-to-week racers and we’ll prepare the same, win or lose, every week.”

The Bristol Night Race always has an electric vibe to it, but is that vibe heightened with it being a cutoff race to make the Round of 12?

“The vibe at the Bristol Night Race is always over the top. It’s always a great event. You really never know what to expect at the Bristol Night Race. It can go completely smoothly or it can be complete chaos. Usually, it’s somewhere in between those two and you just have an exciting night. Bristol is intense every lap. There’s just a lot happening every single corner to make good lap times at Bristol. There’s always something happening in front of you, so you try and look as far ahead as you can to keep yourself out of trouble. But the best way to keep yourself out of trouble at Bristol is to be on offense and going forward, so hopefully we can do that.”

Bristol is fast and loud. That means entertainment for the fans, but it can pose problems when it comes to communicating with your crew chief. How do you handle that aspect of Bristol?

“Bristol is definitely loud and hard for the teams to hear. One of the hardest things at Bristol is just to see what’s going on. I have crashed at Bristol and gone back to watch it on TV and you’re like, ‘What in the hell were you doing? You just ran into four or five cars that have been sitting there for two seconds.’ But, Bristol is a very demanding racetrack. It’s very hard because things happen so fast, communication is hard. It’s easy to make a mistake or pile into a wreck. It’s easy to wreck somebody or to get into a fight. It’s easy to do a lot of things because there is just so much happening. It’s a tough place to race, to put it all together, and it’s mentally and physically exhausting.”

Bristol marks the second short-track race in as many weeks. When it comes to short-track etiquette – what’s OK and what isn’t in this day and age?

“It depends on how mad you are. I think a lot of that just depends on the situation. When you’re not running well, there’s a lot more that’s OK in your mind because the day’s screwed up anyway and you feel like you want to run into somebody just to take your aggression out on the day. A lot of that just depends on who you’re racing and how that guy’s raced you that day, if you’ve had trouble and you’re trying to get back to the front and it’s late in the race, or at the end of a stage – it’s just different things at different times that are OK. In the end, it’s just like every other race, you’ve got to somehow be able to get to the finish with the best result you can get that day.”

Where did you learn short-track etiquette, and is it still applicable today?

“It’s applicable, and a lot of times there are still a lot of guys who don’t apply it and they wind up getting themselves in trouble – tearing their cars up and putting themselves in a bad spot. I think part of our success is being able to race like that when we need to race like that and understanding how that works. In my book, it’s just being smart. In today’s day and age, a lot of it is just go as hard as you can go and screw the other guy. In the end, there are a lot of guys who think that way, but there are a lot of guys who tear their stuff up, too. So, it’s a fine line, but you have to go on the restarts in today’s world. You have to just throw caution to the wind on the restarts because that’s when most of it happens. Once we get strung out and get to the racing part of it, that’s usually when you have to apply some of that and there is some give-and-take. But on the restarts, I would say all those rules go out the window because of how important the restarts are in today’s world.”

Who were the elder statesmen you learned from when you started racing in the NASCAR Cup Series?