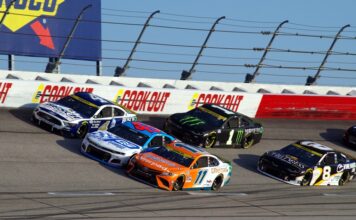 Motorsport racing is becoming increasingly popular amongst viewers, and because of this, the number of sponsors for these races is growing proportionally. Motorsports sponsorships come from various sources, but recently, casinos are beginning to take an interest in sponsoring these races.

Motorsport racing like NASCAR is mainly sponsored by automobile businesses that make donations to keep the sport thriving. Every race sponsor has seen how great the benefits of racing sponsorships are.

That is why gambling sponsorship is now a popular concept among every sponsor. But if something remains unclear to you, the experts from the AussieBestCasinos service have prepared this comprehensive article, which reveals all the moments of sponsorship in racing.

It is even more apparent to casino sponsors that the partnership would only yield benefits with the constantly growing audience for their sports betting sites. During a casino-sponsored race, the sponsor’s logo is painted across the race cars, and race drivers are used as a spokesperson for the casino brand.

NASCAR is an American operating company that is best known for motorsports. Since its inception in 1948 by Bill France, NASCAR has authorized over 1500 motorsports every year in the USA.

Because of the exponential increase in NASCAR viewing over time, companies have funded this race team as a means of advertisements. Famous businesses like McDonald’s, NAPA, KMart, Cheetos, Old Spice, and so many big names have dabbled into this car racing to expand their audiences.

The Indianapolis Motor Speedway created IndyCar as a premium open-wheel motorsport company in the USA. It is a widely followed sport with many partners and sponsors like Honda, Chevrolet, Borgwarner motor oil, Pirelli World Firestone, Dex Imaging, Verizon, and a host of other businesses.

Motorsports require a lot of cash, and the industry can not function alone. However, this funding is not a charity, and they expect the advertising to earn back their investment in large amounts. This clause is a major reason why many companies are still stalling on penning down deals with Motorsport because while it is a widely viewed sport, it is not as popular as the NBL or NFL.

However, viewership figures are beginning to increase, and games are now beginning to get more endorsement deals. It is not that simple for race drivers seeking sponsorship to get a business to trust that you are the one for them. Sometimes, it is not about being a good athlete on the track; it is about the people you command and how popular you are to audiences.

Endorsement deals pay a lot, and it is another great source of income. Most athletes are already deep into this and even refer to it as a second job because it pays. As a Motorsport driver is looking to earn more, betting platforms are a great place to look. They are just now beginning to take an interest in this sport, and as a driver, there are so many ways to win them over:

Even though they are still prospects, there will be a record of this if it ever happens. Supporting sponsors go a long way in establishing a lengthy relationship between the two parties. As a driver who hasn’t ever gambled, supporting might be a little difficult because you don’t want to lose money on a game you have no idea about.

That is why in many betting houses like this, you don’t have to spend all your cash before supporting. Plus, you stand a chance of winning back thousands if you’re lucky, which you have to be since you’re a racetrack driver.

Your media presence is very important in proving you’re the right candidate for their endorsements. Potential sponsors check for large following, media content, and audience interaction.

The crowd at the field is not enough. The media is the mainstream of business these days, and so to get sponsorship deals, drivers need to take their social presence very seriously.

When putting a sponsorship proposal together, so many people make the same mistake. Don’t base proposals on the price of services; this would make your potential sponsor a little skeptical because all they can picture is the amount of money leaving their purses. Your proposals should contain strict outlines of how their investment in you would yield instant profits.

Talk about background information, media, offline presence, the NASCAR competition you participated in, achievements, and how all these would help control the audience into purchasing their services.

Do adequate research before submitting proposals; this would help give adequate information on how to prepare. To approach a casino, you need to have a good idea of sports betting, blackjack, poker, and others. Some platforms even have the best slot car racing set, and this knowledge can be a great improvement to your portfolio.

A business would hardly give sponsorship to people who have no idea of how to use their services. Many drivers gamble and play games for fun, so to stand out, you should also gain suitable knowledge on how these work.

Betting companies and NASCAR have found a working relationship that seemed to be beneficial for both parties. Previously, no online casino took an interest in this sport. Still, as the sport continues to grow and flourish, gambling operators have concluded that their target markets make up some percentage of the Motorsport viewers and have started to approach this sport with sponsorship deals.

At NASCAR events, Sports companies let them paint the cars with the business logos or even go further to make drivers their spokesperson or brand ambassadors. Although the two industries are opposite in the services they render, they have found a way to mutually benefit from the working relationship between one another.

Betting platforms have enough money to sponsor Motorsport and NASCAR race drivers, and in turn, they have enough command of the audience and the target market to make their business boom. On both ends, this working relationship would be beneficial in the long run. However, to start the partnership requires a lot of work, and both parties should be willing to put in the effort to make this work.

How to Boost Your Match Prediction Stats