TR3 Performance Steps up to Pro class at Sebring 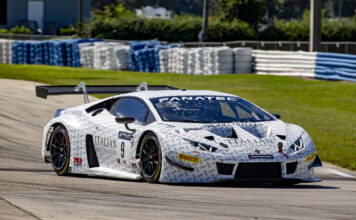 SEBRING, FL (30 Sept. 2021) – TR3 Performance steps up to the Pro class for the first time this season as the Fanatec GT World Challenge America powered by AWS returns to historic Sebring International Raceway for the final doubleheader weekend of the campaign.

“We’re happy to be back in the pro class for the first time since 2018 with Ferrari,” said Gregory Romenelli. “We had a pretty successful run and both 2017 and 2018 being the first time running in the pro category. We are here this weekend at our home track, ready to prove what we are capable of with a Lamborghini.”

Altoe is currently seventh in the GT World Challenge America Pro-Am standings, despite missing three races. His best finish is second at Road America, with additional podiums at Circuit of The Americas and Watkins Glen International.

“I’m really excited to be racing in Sebring,” said Altoe. “It will be my first time at that track, and first time this season with TR3 in a Pro car with Dennis Lind. I know him very well since 2018. He’s a real professional and fast driver, so I’m really looking forward to this weekend. We will try to take the maximum out of it, and to do a great race in the home of TR3 Racing.”

Lind was both the World and European Champion of Lamborghini Super Trofeo in 2016.

“I’ve just arrived in America, and it’s going to be cool driving for TR3 Racing,” Lind said. “It’s going to be a first, racing GT3s stateside, but I’m very confident after meeting the team and also knowing my teammate for the weekend that it will be a success. I’m super excited for it; hopefully, we can bring back some big medals.”

Lind is the nephew of Jan Magnussen and cousin of Kevin Magnussen, former Formula One drivers who now compete in IMSA.

“Sebring has a good history for Lamborghini itself,” Lind said. “It has many good performances there, and I’m sure this weekend will be no exception.”

TR3 Performance was founded by Arthur, Oliver, and Gregory Romanelli in August 2012. Frustrated with the rising costs and plummeting quality from local shops, the brothers saw an opportunity to establish a shop of their own that would live up to their high standard of excellence, where they could hold themselves to the caliber of workmanship they had sought out in the marketplace as enthusiasts. In 2015, TR3 Racing was established as the team stepped into racing at the professional level. What started out as a modest 2,300-sq.ft. enterprise has now exploded into the premier performance shop in South Florida.