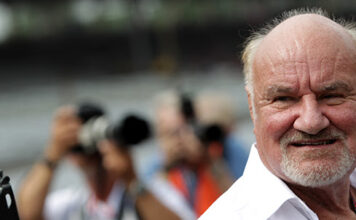 Kalkhoven was co-owner, with CART champion Jimmy Vasser, of the No. 11 Hydroxycut KV Racing Technology-SH Racing Chevrolet that Tony Kanaan drove to an emotional victory in the 2013 Indianapolis 500 presented by Gainbridge.

Kanaan’s first Indy 500 win was the highlight of more than a decade of team ownership for Kalkhoven, who fielded teams in the Champ Car World Series and the NTT INDYCAR SERIES for many champions and stars of the sport, including Kanaan, Vasser, Will Power, Cristiano da Matta, Paul Tracy and Sebastien Bourdais. Kalkhoven’s teams – known as PK Racing, PKV Racing and KV Racing Technology – earned seven victories between 2003-16 in major North American open-wheel competition.

Ownership of various racing teams was only part of Kalkhoven’s deep involvement in motorsports that started after a very successful career as a business executive in fiber-optic telecommunications networks and as a venture capitalist.

Kalkhoven was a noted philanthropist. He served on the board of directors of the Association of Hole in the Wall Camps, which benefits children with serious illness. He also was an avid aviator, with a commercial pilot’s license and experience in a variety of aircraft, including Gulfstream intercontinental jets.

“Motorsports has lost one of its true leaders. Kevin Kalkhoven had a great passion for open-wheel racing, and his vision and support helped guide the sport through some turbulent times. As a leader of the Champ Car World Series, Cosworth Engineering and the KV Racing Technology team, Kevin had an incredible impact on INDYCAR. Our thoughts are with the Kalkhoven family and Kevin’s many friends and colleagues that are coping with his loss.” – Roger Penske

“I met Kevin in 2013, and we quickly developed a personal friendship and a lot of common ground in racing. In many ways, winning that year’s Indianapolis 500 with Tony Kanaan must have been the highlight of his racing life. I’m sure he didn’t come back down to earth for many months. Kevin was a colorful, forceful personality who constantly brought new ideas to the table in an effort to grow the sport. I will miss him.” – Mark Miles, President and CEO, Penske Entertainment Corp.

Official Release
Previous articleLuke Lambert Named Crew Chief for Gragson, No. 9 Team at JRM
Next articleFirst 5 Mods for Your 2017+ Ford F-250 | “The Haul”