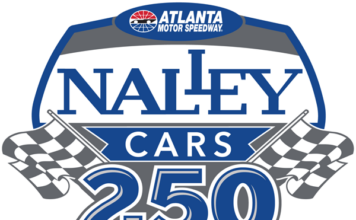 RILEY HERBST, No. 98 Monster Energy Ford Mustang — YOU FINISHED 4TH BUT YOU DON’T LOOK TOO HAPPY. “Yeah, it’s more disgust to be honest with you. I mean, this is a top five race team week in and week out and we didn’t execute at all on my end – on either end of the race team today – but we got lucky and got another top five finish, which we needed. We didn’t get any stage points, so that hurt us, but, like I said, we worked hard so we’re proud of that on the 98 Monster Energy Ford Mustang, but we’ve got to clean some things up if we want to go win some races.”

WHAT ABOUT THE CONTACT WITH MYATT SNIDER AT THE END? “I don’t know. He was dragging sparks. I got through the gears better than him. We’ve got Roush Yates power, I don’t know what to tell you. I pulled to the inside. I was clearly there and he wanted to come down and that was it.”

WHAT ABOUT THE FINAL RESTART AND YOUR THOUGHTS FROM YOUR PERSPECTIVE? “I wish we would have been third on that red flag so we had the opportunity to go outside, but we were fourth so I had to push the 21. I knew we were gonna be at a disadvantage on the bottom and all we could do was push and we came home fourth.”

RYAN SIEG, No. 39 CMRoofing.com/A-Game Ford Mustang – DO YOU FEEL LIKE YOU DID EVERYTHING YOU COULD THERE AND THEY JUST GOT TOO GOOD OF A PUSH ON THAT LAST LAP? “Yeah, you get too far out there and then you try to block all their runs, but I went to the outside to block his run and he crossed over. There was nothing I could do. You’re pretty much a sitting duck when you’re out front leading like that. You’re just hoping you can block good enough.”

IRONIC IT WAS YOU AND TY? “Yeah, no doubt, but he did help us there and got us to the lead, so it is what it is and we’ll go onto COTA. All in all, it’s great for our team. We’re a small team. We made gains on it, but we’re still lacking a little bit. It’s so tough. Everybody is on it all the time, but to gain on it each week we’re moving in the right direction and we’ll get there. We come back here later in the year and we’ll make it better and hopefully find ourselves in victory lane.”

DID YOU FEEL GOOD AT THE RED FLAG OR FELT YOU WERE A SITTING DUCK? “Yeah, that crossed my mind, but I was thinking positive. I want to think positive and try to do all I can do, but you’re definitely a sitting duck. I don’t want to go too far out, but when you lock bumpers pushing each other there’s not a whole lot I can do. It’s not in my control. He just pushed us out there into the lead, real far out there, and then crossed us over at the end.”