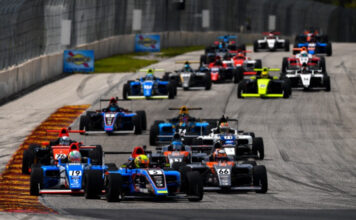 Competing as part of the Road America SpeedTour weekend, FR Americas and F4 U.S. will join the Sportscar Vintage Racing Association (SVRA), International GT, Miata Heritage Cup and OPTIMA’s Search for the Ultimate Street Car for three days of racing action, May 20-22. Tickets are available online at SpeedTour.net, or at the gate.

Several FR Americas drivers are looking to repeat prior success at Road America this weekend. Dylan Tavella (No. 14 Crosslink Kiwi Motorsport Ligier JS F3), the only driver in the field with past FR Americas experience at Road America, won Race 1 at the Wisconsin road course last year. As the series’ most recent victor with a win at NOLA Motorsports Park last month, Tavella is looking to go back-to-back this weekend. Mac Clark (No. 25 Future Star Racing Ligier JS F3) had one of his most successful F4 U.S. weekends while visiting Road America last year. The Canadian won two of the three F4 U.S. races and jump-started his campaign to become the series’ Vice Champion. Nico Christodoulou (No. 22 VRD Racing Ligier JS F3) won the third race in F4 U.S. competition at Road America last year. A rookie in FR Americas, the 17-year-old is looking for his first podium of the 2022 season. Another driver with prior success at Road America is Alex Kirby (No. 8 Doran-Kroll Competition Ligier JS F3), who also happens to be a SAG member for stunt and performance driving. Kirby won on the Wisconsin circuit while competing in the Porsche Pirelli GT3 Cup series.

FR Americas kicked off their 2022 season last month at NOLA in a weekend that saw three different winners in the three races. Mac Clark won Race 1 to mark his first victory in his first series start. PMH Powering Diversity Scholarship recipient, Raoul Hyman (No. 27 Bethesda Holdings Limited / Solomon Capital Enterprises / Oaklands / Kinross Ligier JS F3), won in Race 2 after leading practice, qualifying, and starting on the pole for all three of the weekend’s races. After finishing third and second, respectively, in the first two races, Dylan Tavella finally snapped a 16-race winless streak with his victory in Race 3.

With Dylan Tavella and Raoul Hyman finishing on the podium in each of the three races at NOLA, the points battle is already heating up in FR Americas. Tavella and Hyman are currently tied for first with 58 points, trailed closely by Mac Clark with 50 points. Ryan Yardley (No. 78 Crosslink Kiwi Motorsport Ligier JS F3), follows with 30 points, and Jason Alder (No. 77 Drive for Diabetes Awareness / HAKUN Ligier JS F3), rounds out the top five with 28 points.

When Brandon Graham got out the United States Marine Corps (USMC), he wasn’t sure which way to turn; but then, he found racing.

“For lack of a better word, I was depressed,” said Graham, co-owner of IGY6 Motorsports. “I didn’t have all the things the military gave me—the camaraderie, the brotherhood, all that stuff. I had a friend who was in racing that said, ‘Hey, why don’t you come give this a shot.’ So, I did and it just checked all the boxes for me. I’ve been doing it ever since.”

Graham is in his sixth season working in motorsports. This year, he joined fellow veterans Clark Bowlsbey (United States Navy) and Jonathan Hilderman (USMC) as partners in IGY6 Motorsports. The team’s name is short for “I Got Your Six,” a term meaning “I’ve got your back.” All of the partners and crew members are veterans, and their driver, Hayden Bowlsbey, was a military child.

“Our mission statement is to help other veterans; to bring awareness to the problem that is happening with 22 veterans committing suicide every single day.” Graham continued. “We want to bring veterans to the racetrack and show them that racing can be an outlet. It can help with the depression and all the stuff you get and feel when you get out of the military. The main goal for all of us is to bring the veteran suicide number down as low as we can.”

F4 U.S. Championship Powered by Honda
Some F4 U.S. Drivers Gain an Edge with Prior Laps at Road America

The 2022 F4 U.S. season opened at NOLA Motorsports Park last month in the series’ first trip to the Louisiana track. With three races scheduled, the series was able to celebrate three different winners. Lochie Hughes, a native of Australia’s Gold Coast, kicked off the weekend by winning his first race in his first F4 U.S. start while driving the No. 6 Jay Howard Driver Development / CSU One Cure / Lucas Oil / Pelican Ligier JS F4. In Race 2, it was Bryson Morris (No. 39 Crosslink Kiwi Motorsport Ligier JS F4) who came from nearly three seconds back to step atop the podium and break a six-race winless streak. After a one-year hiatus, Nicholas Rivers (No. 65 Velocity Racing Development Ligier JS F4) didn’t just return to F4 U.S. competition. Rivers went all the way to Victory Lane, securing his first series win in Race 3 at NOLA.

Championship Battle Takes Shape After Round 1

The championship battle is slowly unfolding in F4 U.S. with three races already in the books. With both Lochie Hughes and Bryson Morris scoring a win and second-place finish at NOLA, it was Hughes’ fifth-place finish in Race 2 that made the difference securing him the points lead with 53 points. Morris remains well within striking distance with 43 points, and only one-sixth of the season complete. The battle from third through fifth remains extremely tight with only six points separating the three drivers. Nicholas Rivers is currently ranked third with 33 points, followed by Ryan Shehan with 31 points, and Alex Berg (No. 08 Doran-Kroll Competition Ligier JS F4) in fifth place with 27 points.

Robert “Bob” Ostholthoff never got to watch his son Joe Ostholthoff race, but this weekend he’s sure to be smiling down on his son, as Joe races the No. 7 Jay Howard Driver Development / CSU One Cure / Lucas Oil / Pelican Ligier JS F4 at Bob’s “home track,” Road America.

“The only reason I’m racing is because of my dad,” said Joe Ostholthoff. “He got me into it.”

A native of Chicago, Bob founded the Porsche Club of America Chicago branch at Road America. While the younger Ostholthoff was never able to experience Road America with his father, it didn’t stop them from sharing a love of motorsports with racing always on their TV at home. Bob passed away in March 2017 after battling cancer.

The FIA-certified Formula 4 United States Championship & Formula Regional Americas Championship are designed as entry-level open-wheel racing series offering young talent the opportunity to demonstrate their skills on an international platform while keeping affordability and safety as key elements. The Championships align with the global FIA development ladder philosophy of using common components to provide a cost-efficient, reliable and powerful racing structure as drivers ascend through the levels on their way to U.S. or global racing success.