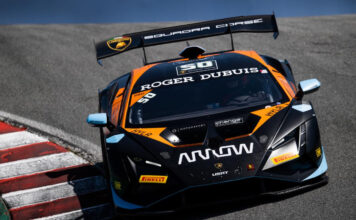 Monrovia, California (Thursday, May 19, 2022) – After successful season openers in Lamborghini Super Trofeo at Laguna Seca and SRO at Sonoma, both O’Gara Motorsport / Change Racing / USRT teams return to the track this weekend at NOLA Motorsports Park near New Orleans..

Lamborghini Super Trofeo Pro drivers Edoardo Piscopo and Patrick Kujala head into the weekend with a one point lead in the North American Championship after the first round. The pair started on the pole and finished in second-place in the first race of the season Laguna Seca and went on to win the second race of the weekend in the Arrow-sponsored No. 50 Lamborghini of Beverly Hills entry after starting seventh.

SRO Pro duo Steve Aghakhani and Loris Spinelli started their season at Sonoma Raceway last month in their No. 6 SADA Mercedes AMG. The pair, who qualified fourth for Race 1, drove a great race finishing in second place in their first race of the season. The No. 6 started on pole for Sunday’s race, but encountered some difficulties and ultimately finished fifth in class. Regardless of the disappointing finish in Race 2, the pair sits just two points out of second place in the championship and are confident that they’ll have the results necessary to move them up in the points this weekend.

Back over in the Lamborghini Super Trofeo series, Damon Ockey and Patrick Liddy return in the No. 8 VF Engineering Lamborghini of San Diego. Liddy scored an impressive overall pole for the pair in Sunday’s race, but the duo had some issues in the second half of the race and finished just off the podium. They enter this weekend fifth in Pro Am, but are only five points behind the third-place competitors in their class. Both drivers are looking forward to this weekend and expect to move higher up in the points standing before leaving NOLA.

John Hennessy entered the season as an LB Cup driver, but his speed on the track in early practices had him quickly moved up to AM class. Hennessy scored a podium in the No. 33 Arrow / O’Gara / Change Racing / USRT Lamborghini of Charlotte in his first race in the more competitive class and enters this weekend third in the AM championship. After testing last week at the track, Hennessy is confident he’s looking at another successful race weekend.

Ofir Levy and Jon Hirshberg are also back for this weekend’s competition at NOLA Motorsports Park. The LB Cup duo scored two podium finishes at Laguna Seca in the No. 13 MexiWood / Dakine Lamborghini of Rancho Mirage. They currently sit second in the LB Cup championship, but are only two points behind the leader.

The weekend will be a busy one for the O’Gara Motorsport / Change Racing / USRT team starting with tests for both Lamborghini Super Trofeo and SRO today. Practice for both series starts bright and early Friday morning followed by qualifying and Race 1 on Saturday, with Race 2 on Sunday. Come out and cheer for your favorite O’Gara Motorsport / Change Racing / USRT driver if you’re in the area.

Steven Aghakhani – “I’m super excited! We’re finally getting back out in the #6 SADA Systems, Gotham sponsored, US RaceTronics powered Mercedes AMG GT3 at NOLA Motorsports Park. Everyone on the team, including myself, is more than prepared for this upcoming race weekend. Everyone had a very large learning curve at Sonoma and we are ready to go and show what we learned.”

Patrick Kujala – “After a successful weekend at Laguna Seca we will try to carry this momentum into NOLA. Everyone in the team is working extremely hard to get another good result.”

Edoardo Piscopo – “This will be my first time at NOLA. I look forward to learning the track, adjusting the setup to a very different circuit and keeping up the momentum from Laguna Seca. We still have 10 rounds to go therefore consistency is everything.”

Damon Ockey – “Looking forward to our next round at NOLA. We had some bad luck at Laguna with Safety Cars and driver contact but are ready to push forward. Liddy has shown he has the pace, I am a little off pace having been out of the car for 2 seasons.”

John Hennessy – “I suspect with the unpredictable weather conditions, lack of track time for most drivers and the large field, this will be one of our more exciting races this season. My goal is to stay focused, drive a clean race and get on the podium for the Team!”

David Cozart – Team Manager Lamborghini Super Trofeo – “The team is excited and looking forward to the NOLA weekend. A lot of the guys have put in some serious hours over all our US Racetronics programs and have accomplished an extraordinary amount of work in the last couple of months – hats off to them. Our four new Lamborghini Super Trofeo Evo 2’s performed above expectations at the Laguna Seca and we look to carry that momentum forward at NOLA . Having partners like Arrow Electronics, VF Engineering, MexiWood, Dakine, O’Gara Motorsport and Change Racing have given us a strong foundation to launch into the 2022 season to challenge in all four categories of the Lamborghini Super Trofeo Series this year.”

US RaceTronics (USRT) was founded by Shane Seneviratne in 2005 to compete in the Atlantic Championship, a formula race car series. The team finished 5th in points its first year and continued its success during the succeeding years, ultimately amassing a total of 21 podiums, 7 poles, 5 race wins and finishing 3rd in the 2009 Atlantic Championship. USRT was put on hold after series officials announced the Atlantic Series was put on hiatus.

The success of 2015 reignited Seneviratne’s passion for racing and he relaunched US RaceTronics to compete in the 2016 LBSTNA Series. The team has won multiple North American and World Championships and expects to add to their success as they enter their seventh season in the Lamborghini Super Trofeo North American Series.

For more information on how to become a driver with US RaceTronics, learn more about the Series, or attend a race, visit www.usracetronics.com.

O’Gara Motorsport was founded in 2014 by owner Tom O’Gara and celebrated winning the 2015 North American Lamborghini Super Trofeo driver and team Championships. The team goal is to achieve victories in the Series as well as showcasing the brands of their sponsors both on and off the track. With a vertically integrated platform that starts at the dealership and accelerates to the top levels of professional sports car racing, everyone at O’Gara is dedicated to providing a comprehensive program for anyone, from the casually curious to the dedicated racer.

Most recently claiming the 2021 Amateur World Championship in Misano, Italy. Change Racing also claimed all SIX 2020 North American Championships, including the Pro, Pro-Am, Am and LB Cup class championships as well as the Team and Owner championships.