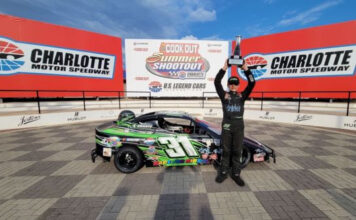 CONCORD, NC (July 5, 2022): While Mother Nature took the fireworks out of the sky, the drivers put a show on the track for Round 5 of the Cook Out Summer Shootout at Charlotte Motor Speedway presented by Cabarrus Brewing. Connor Zilisch (VP Racing Semi-Pro division) and Darren Krantz Jr. (Bandolero Bandits) were among the drivers claiming stars and stripes victories one day after the Fourth of July.

Zilisch Outruns the Rain in the VP Racing Semi-Pro Competition

The VP Racing Semi-Pro feature showcased Trevor Wester’s speed as he led the competition for the first six laps until a restart gave Connor Zilisch room to take control. The second caution of the night gave the lead back to Wester who maintained it for five more trips around the frontstretch quarter-mile. On a third restart, Zilisch took the inside corner of turn two at lap 12 to pass Wester for good in a race to outrun the weather. Lightning in the area caused the race to be called at lap 19, giving Zilisch the win.

In the Bandolero Bandits division, Hudson Canipe started at the front with an intense battle behind him among Ben Morabito, Darren Krantz Jr. and Beckham Malone. Canipe maintained his lead until lap 16 when Owen Zacharias blew a tire to bring out a yellow flag. Canipe and Morabito battled side by side after the restart before contact sent Canipe spinning sideways and out of contention. On the subsequent restart, Krantz Jr. passed Morabito for the lead off turn 4 on lap 18, then cruised to victory for his second Cook Out Summer Shootout win.

Krantz Jr. is now five for five in podium finishes at Charlotte Motor Speedway this summer including a first place win in Round 2.

Cook Out Summer Shootout fun continues with Round 6 on Tuesday, July 12. “Night of Games” at America’s Home for Racing will feature a full slate of fun and games with thrilling Legend Car and Bandolero action. Next week’s schedule will also include weather-postponed Boston Reid & Company Pro and Masters division features from tonight’s schedule.

Cook Out Summer Shootout entry is $10 for adults and kids 12 and under are FREE. Tickets can be purchased at the gate, by calling 800-455-FANS or online at www.charlottemotorspeedway.com/tickets.

Top 10 in each division of Tuesday’s races (unofficial results):

Boston Reid & Company Pro: Postponed to next week due to weather-impacted track conditions.

Masters: Postponed to next week due to weather-impacted track conditions.