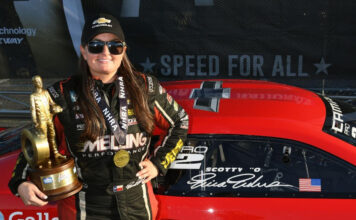 Chevrolet drivers keep rolling in third round of Countdown

MADISON, Ill. (Oct.2, 2022) — Halfway through the National Hot Rod Association (NHRA) Countdown to the Championship and the Chevrolet drivers who have ruled their respective professional classes throughout the season continued to pile up points in the NHRA Midwest Nationals at World Wide Technology Raceway.

Robert Hight increased his Funny Car points lead to 46 with his eighth victory of the season and 61st of his career in the third event of the Countdown. Hight, the No. 1 qualifier in the AAA of Missouri Chevrolet Camaro SS, defeated 2021 class champion Ron Capps in the final on a holeshot. Hight, with a better reaction time, ran 3.911 seconds at 331.61 mph to his opponent’s 3.908.

It was the 155th Funny Car victory for Chevrolet since 1967 and the 75th with the Camaro body.

“We just have to keep doing what we’ve done all year long, not change a single thing,” said Hight, who has 26 wins with Chevrolet. “We had a little hiccup last week but we’re right back. We qualified well and we win a race.”

Erica Enders picked up her sixth Pro Stock win at the track, including the past four years driving the Melling Performance Chevrolet Camaro SS. Enders, who holds a 44-8 elimination round record this season, stretched her points lead to 120 with a victory over Dallas Glenn in a rematch of the 2021 final.

Brittany Force, the No. 5 qualifier in the Flav-R-Pac/Monster Energy Chevrolet dragster, broke her own national speed record with a pass of 338.43 mph in the first round of Top Fuel eliminations.

Force, who holds the top 10 national event speed marks of all time in the class, previously set the record of 338.17 mph in November 2019 at The Strip at Las Vegas Motor Speedway.

Teammate Austin Prock, the No. 12 qualifier in the Montana Brand/Rocky Mountain Twist Chevrolet dragster, was the unlucky opponent. Force, the 2017 Top Fuel champion, is 16-2 in first-round matchups this season. She fell in the quarterfinals when the dragster lost a cylinder early in the run and remains third in the standings – 30 points out of the lead.

John Force, the No. 2 qualifier in the PEAK Antifreeze and Coolant Chevrolet Camaro SS, advanced to the semifinals for the fourth consecutive race and remains fourth in the Funny Car standings.

Enders earned her eighth victory of the season and 41st of her career in defeating Glenn, driver of the RAD Torque Systems Camaro SS.

“This is definitely a really fun ride,” she said. “We started off the season with the attitude that we weren’t going to take any crap from anybody, and my guys have done just that, and I’ve done my best to do that in the cockpit. We’re super stoked to be parking this Melling Performance Camaro in the winner’s circle at St. Louis for the umpteenth time.”

Enders eliminated No. 1 qualifier Kyle Koretsky, driver of the Lucas Oil Chevrolet Camaro SS, in one semifinal. Glenn defeated Matt Hartford, runner-up a week earlier at zMAX Dragway in the Total Seal Camaro SS, in the other semifinal.

After three weeks in a row of racing to start the Countdown to the Championship, Chevrolet teams will regroup before heading to suburban Dallas for the Texas NHRA FallNationals on Oct. 14-16. Top qualifier Greg Anderson won the Pro Stock race at Texas Motorplex in 2021, while Brittany Force was the No. 1 qualifier in Top Fuel.

WHAT ARE YOU DOING RIGHT?

“We just have to keep doing what we’ve done all year long, not change a single thing. We had a little hiccup last week but we’re right back. We qualified well and we win a race.”

FROM QUALIFYING TO RACE DAY, THIS WAS A GREAT WEEKEND FOR YOU.

“This was a 40-point swing. Capps gets me in the final and it’s a single-digit lead. You don’t want that with three races left. Good job to the Triple A of Missouri team. They got it done, kept digging every round. One thing is pretty cool, I get to celebrate this year. 2018 wasn’t much fun. That’s the only win that I’ve ever had that I didn’t get to celebrate in the winner’s circle.”

“This whole class is amazing. The final four is pretty impressive. We know who has the most wins obviously and no one is ever going to catch that. But Capps and I are battling it out for No. 2. This is amazing.”

HOW WOULD YOU DESCRIBE THIS SEASON?

“I’m just a blessed girl. This is definitely a really fun ride. We started off the season with the attitude that we weren’t going to take any crap from anybody, and my guys have done just that, and I’ve done my best to do that in the cockpit. We’re super stoked to be parking this Melling Performance Camaro in the winner’s circle at St. Louis for the umpteenth time. This is just awesome.”

THIS PLACE HAS BEEN REALLY GREAT TO YOU.

“Steve Torrence and I were talking and we’ve been coming here since we were 15 years old with our Super Comp dragsters hauling them up from Texas. We love St. Louis and we’ve had a to of success here. This is super meaningful because it’s my crew chief Mark Ingersoll’s home track. It’s always fun to win in front of a hometown crowd.”

QUALIFIED NO. 4 AND IT WAS SO TIGHT.

“We were in the No. 4 hole but we’re only one-thousandth of a second out of the first position. We didn’t run the way we wanted to in qualifying and didn’t accumulate any baby points there, but we made up for it by going four rounds on Sunday. Beating my teammate Troy Coughlin in the second round and watching my other teammate Aaron Stanfield go out in front of him, that was just a huge point swing for us. We made up some ground today but obviously have our work cut out for us. We’re going to Texas next and my next-favorite track is Vegas. Vegas and St. Louis we always seem to win there, so I’m hopeful to keep the drive for five alive.”