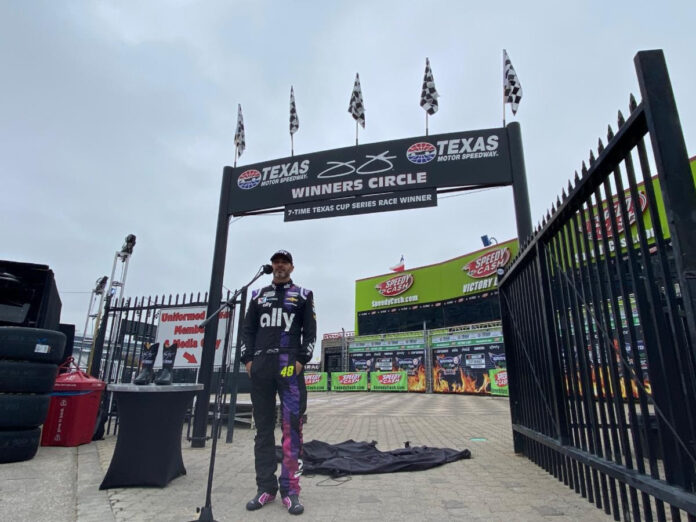 During the speedway’s Texas Lottery® No Limits Live! Pre-Race Show, Johnson unveiled a “Jimmie Johnson Winner’s Circle” sign above the entry gate to SpeedyCash.com Victory Lane. He was also presented with a proclamation from Texas Governor Greg Abbott naming him an honorary Texan and a one-of-a-kind pair of cowboy boots from Lucchese Boots.

Johnson, the No Limits, Texas all-time NASCAR Cup Series win leader with seven, will conclude a fulltime NASCAR premier series career which began in 2002 but will continue his professional racing career by running a partial schedule of the 2021 NTT INDYCAR SERIES season.

Bowyer twice finished runner-up (Spring 2011, Spring 2019) in 29 starts at Texas Motor Speedway. He was presented with a cowboy hat but, instead of a pair of Smith & Wesson 629 Deluxe six-shooters traditionally given for winning a NASCAR Cup Series race at the Great American Speedway, he was presented with a kid’s pair of cap-gun pistols.

Bowyer, one of the all-time great personalities in the sport, will conclude a 16-year NASCAR Cup Series career that includes 10 premier series victories as well as the 2008 NASCAR Xfinity Series championship. He will move into the Fox NASCAR broadcast booth next year.

“Jimmie and Clint are tremendous ambassadors of our sport, both on and off the track, so we wanted to do something special for their final time here behind the wheel of a NASCAR Cup Series car,” said Texas Motor Speedway President and General Manager Eddie Gossage. “Jimmie knows his way to SpeedyCash.com Victory Lane better than anyone so it was appropriate to do something special for him there. We decided to have some fun with Clint because there’s no one better than him in the NASCAR garage to define fun. The great thing with both is they will continue to make great contributions to the sport in their new roles.”

TICKETS:
Adult season tickets for Texas Motor Speedway’s 25th season in 2021 season start at just $169 with season tickets for kids ages 12 and under starting at just $30. Tickets are also on sale for this Sunday’s Autotrader EchoPark 500/SpeedyCash.com 400 NASCAR playoff doubleheader and can be obtained at www.texasmotorspeedway.com/nascar-indycar-tickets/individual-tickets or by calling (817) 215-8500.