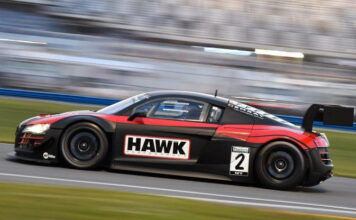 Cindric, less than a month removed from clinching the Xfinity Series title in the No. 22 Team Penske Ford in Phoenix on November 7, co-drives the CRP Racing-prepared 2009 No. 2 Audi R8 LMS at Sebring this weekend with longtime family friend and supporter David Roberts.

“I have known Austin for approximately nine to 10 years and met him through his Dad, Tim Cindric, when my company sponsored CRP Racing in SCCA World Challenge,” Roberts said. “We were at the same tracks on many weekends with IndyCar, and that provided me with the opportunity to follow Austin early on in an F2000 open wheel car as he was just starting on the ‘Road to Indy.’”

Tim Cindric began looking for an opportunity for Austin to get some seat time in a sports car and Roberts offered a ride in his Porsche 944 Turbo Club Sport.

“The HSR Savannah event was approaching and I felt that would be a great place for Austin to get his start in sports cars,” Roberts said. “Taking it easy because his Dad told him to, he finished second in his first race on Saturday. On Sunday, Tim turned him loose and he won the second race of the weekend while earning the respect of his fellow competitors.”

That Savannah HSR weekend was a significant one for Austin.

“Without a doubt, Dave has always been an integral part of my career,” Cindric said. “I always joke and say Dave was the first person to ‘put a roof over my head!’ The first time I was in a full-bodied race car was in Dave’s Porsche 944 Turbo down in Savannah a bunch of years ago. For him to be able to trust me in that car at a young age was pretty unique. I was really nervous about not damaging the car but also some really cool cars I was sharing the track with. HSR always brings out some really cool vintage cars and it was pretty special to be out there racing with them at such a young age.”

A tribute race to the 12 Hours of Sebring, the HSR Classic Sebring 12 Hour celebrates not only the legendary race cars that have competed at Sebring over the last half century but also the rich military aviation history that first put Sebring on the map.

“I ran in the 12 Hours of Sebring with the Lexus GTD program in 2017 and I am no stranger to the track,” Cindric said. “I have done a lot of open-wheel races there, but it has probably been since 2017 that I have been there. I haven’t had the opportunity to go back until now.”

Roberts watched nearly all of Cindric’s Xfinity Series races this year, straight through the title-clinching finale in Phoenix.

﻿“After Austin won the championship, we exchanged a number of texts and I asked him if he would like to get back into a sports car,” Roberts said. “He responded almost immediately that he would like to race at Sebring, so here we are.”

“Throughout my career, David has been a great supporter of mine and also a great friend,” Cindric said. “It’s great to have the best season of my racing career – winning the NASCAR Xfinity Series championship – and in some ways being able to end the year having come full circle. This is the last event I plan to run this year, and to go to a track like Sebring and race some cool old cars back in HSR and have some fun is a great opportunity.”

Noteworthy: Cindric’s talent behind the wheel wasn’t the main thing that impressed Roberts when they first met. “I became a huge fan of Austin, but not because of his driving ability, but because of the way he handled himself as a young man, Roberts said. “It has actually taken me until this year to become ‘Dave’ rather than ‘Mr. Roberts’ in the eyes of Austin! Tim and his mother Megan Cindric did a great job raising him.”