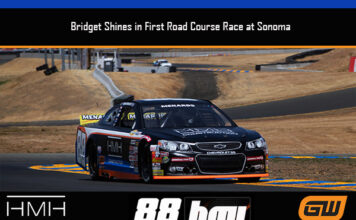 TOOELE, UT, June 8, 2021 – Bridget Burgess and the BMI Racing team had a plan for success at her first career ARCA Menards West road course race at Sonoma Raceway this past weekend. Utilizing the tools available to her included seat time in her HMH Construction Chevrolet ARCA car at Utah Motorsports Campus, as well as competing in the NASA Northern California event the week prior.

The single day format gave the competitors only an hour for a combined practice and qualifying session. Bridget headed out on track for a few laps at the start of the session to ensure the setup of the car felt right, and that she was comfortable and focused in the HMH Construction Chevrolet. The team put on a fresh set of tires and sent her out for a qualifying run. Bridget put in a great effort during the session and for a long time was sitting in 6th, by the end of the session she had slipped back to 9th.

The short break between qualifying and the race gave Bridget an opportunity to catch up with fans as Sonoma Raceway opened its doors to spectators for the weekend – the first time in over a year.

The green flag dropped and Bridget accelerated across the start finish line in the HMH Construction Chevrolet. Driving smart and being patient Bridget had moved up to 5th position, and then at lap 16 was turned by overly aggressive driver putting her back to 16th.

It was time for the halfway break, and the team went to work changing the tires and making adjustments to the car for the last 25 laps of the race. The green flag dropped once again, and Bridget focused again on being patient and working with the equipment she had. The second half of the race was a battle, but Bridget wheeled the HMH Construction Chevrolet to an 8th place finish out of a 22 car field. A career best finish for Bridget.

A replay of Saturday’s race at Sonoma will broadcast on NBCSN on Wednesday, June 9 at 6 p.m. ET.
Bridget’s next race will be the ARCA Menards West Series at Irwindale Speedway on July 3rd