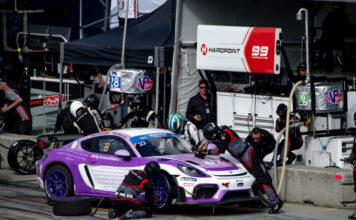 Of Hardpoint’s two drivers, Galante has the most experience at Mid-Ohio. The Pilot Challenge championship veteran has raced at Mid-Ohio in the former ST Class, in TCR and in GS. His best finish at the track is a podium, with a third-place finish during his ST Championship year of 2018.

McAlister has raced at Mid-Ohio twice before in IMSA competition, in 2019 and 2020 in Porsche GT3 Cup North America. McAlister earned two podium finishes at Mid-Ohio during the 2020 tripleheader.

The No. 22 Racing To End Alzheimer’s Porsche Cayman carries 93 names and hometowns of loved ones who are either currently fighting Alzheimer’s or have passed away from the disease. Names are added to the car for the entirety of the IMSA season through a donation at www.r2endalz.org. Included on that list are Mimi Frengs, wife of Racing To End Alzheimer’s founder and champion Philip Frengs; Maureen Galante, grandmother of the team’s co-driver; Jim Nantz, Jr., late father of the sports broadcaster; and Eleanor Jannetti, grandmother of mechanic and tire changer Jason Jannetti, who lost her battle with Alzheimer’s just three weeks ago.

Hardpoint’s No. 99 GridRival Porsche 911 GT3 R is not on the entry list for this weekend’s event at Mid-Ohio, with owner and co-driver Rob Ferriol electing to take a small and temporary step back from his personal racing program to focus on Hardpoint business opportunities within motorsports. The team will return during the 2022 IMSA WeatherTech Championship season, including for all Michelin Endurance Cup races with Ferriol, Katherine Legge and Stefan Wilson behind the wheel.

Nick Galante, Driver, No. 22 Porsche Cayman: “I’m looking forward to getting back to Mid-Ohio. It’s been a couple of years since my podium there, and this Hardpoint team and Sean have made progress every week. That hasn’t shown up in the results yet, but we can feel it and it gives us a chance to surprise some people. Those podiums are hard to earn, but they get extra special knowing that we’re racing for all of these people fighting against Alzheimer’s with us on the Racing to End Alzheimer’s Porsche Cayman.”

Sean McAlister, Driver, No. 22 Porsche Cayman: “Mid-Ohio is not a track that I’ve necessarily enjoyed much in the past, but I’m hoping this time out will maybe change that opinion. It’s a fun track to run on, but it’s very, very important to get a good qualifying position because there are limited opportunities to pass there. I’m looking forward to getting back into the car, getting everything dialed in and figure some things out to extract some more speed from our No. 22 Racing to End Alzheimer’s Porsche Cayman.”

Rob Ferriol, Owner, Hardpoint: “Our full attention at Hardpoint is on the Racing to End Alzheimer’s Porsche in Michelin Pilot Challenge this weekend. We’ve made the decision that sitting out Mid-Ohio with the GTD car is the best move for Hardpoint as a business. The plan has always been to use my racing to provide the beacon. If we’re going to attract the kind of customers we want, we need to have something to inspire them. That’s what the WeatherTech program is for. Obviously I’ve gotten a personal benefit for that, but it’s a demonstrative effort to attract all of those others to what we do. If that means I take a knee from my personal driving to help the business side, so be it. That’s where my focus is, making sure our customers receive the experience I expected to see when I was in their shoes. This doesn’t mean the GTD program is shutting down – quite the opposite. We’ll continue to showcase our top level, but we want to move the needle as a business. The name of the game is getting more people into racing. That’s part of our mission statement and business focus, and we want to be sure we’re keeping our eye on that ball.”
About Hardpoint:

Hardpoint was founded by Rob Ferriol in 2018 with the vision of combining his experience as a successful entrepreneur with his passion for racing. Headquartered at VIRginia International Raceway, the team captured the 2021 Porsche Carrera Cup North America Pro-Am championship in its inaugural season and competes full-time in the IMSA WeatherTech Sports Car Championship in the No. 99 GridRival Porsche 911 GT3 R with co-drivers Ferriol and Katherine Legge, joined by Stefan Wilson for Michelin Endurance Cup races. In 2022, Hardpoint has added the No. 22 Racing To End Alzheimer’s Porsche 718 Cayman GT4 RS Clubsport driven by Nick Galante and Sean McAllister in IMSA Michelin Pilot Challenge Grand Sport (GS). More information on Hardpoint can be found at www.hardpoint.com or through its strong social media presence on Facebook, Instagram and Twitter.