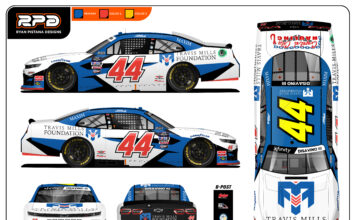 MOORESVILLE, N.C. (Sept. 26, 2022) – Howie DiSavino III Racing announced today that the Travis Mills Foundation will adorn the No. 44 Chevrolet for Alpha Prime Racing for the Sparks 300 at Talladega (Ala.) Superspeedway.

During his third tour of Afghanistan, U.S. Army SSG (Ret.) Travis Mills, set his bag down on an IED causing an explosion where he lost portions of all his limbs. He woke up on his 25th birthday to learn of his injuries, later becoming a quadruple amputee; one of only five from the wars in Iraq and Afghanistan to survive his injuries.

Mills spent 19 months at Walter Reed National Military Medical Center where he learned to feed himself, drive a car, and walk again. During recovery, Mills and his wife Kelsey attended adaptive sports programs. During that time, Mills began to refer to himself as a “recalibrated veteran.” He didn’t like the term wounded warrior; his wounds had healed. He came to the realization that he had to reexamine his thinking and correct it in accordance with his new way of life.

With this new mission, the Travis Mills Foundation was founded in 2017 and offers recalibrated veterans and their families a week-long retreat, where they enjoy kayaking, tubing, canoeing, fishing, a ropes course, arts and crafts, skiing, snowshoeing, dog sledding, and more. Families also can connect with other families and relax and reset with one another.

“I am extremely humbled by Howie’s support,” Mills said. “He’s helping spread the good work done by the Travis Mills Foundation and the support it offers to our nation’s heroes and their families. He’s a true champion for veterans.”

﻿Alpha Prime Racing is a NASCAR Xfinity Series team owned by Craig and Tommy Joe Martins as well as Alpha Prime Sports Founder and CEO Caesar Bacarella. The team was originally founded in 2009 under the name Martins Racing.

The team announced in 2022 that they will run the No. 44 and No. 45 Camaro’s full-time, with multiple drivers splitting driving duties including Martins, Bacarella, Josh Bilicki, Rajah Caruth, Howie DiSavino III, Ryan Ellis, Kaz Grala, Sage Karam, Andy Lally, Julia Landauer, and others.